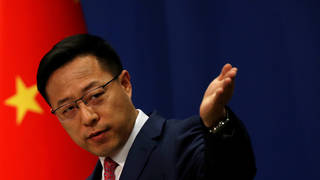 China said it would impose sanctions on the US after US President Donald Trump signed legislation to punish Beijing for “oppressive acts” in Hong Kong and an executive order ending all preferential treatment for the city.

“The US law…maliciously denigrates Hong Kong’s national security legislation, threatens to impose sanctions on China, and seriously violates international law and basic rules of international relations. It is gross interference in Hong Kong affairs and China’s internal affairs,” China’s Foreign Ministry said in a scathing rebuke to Trump’s announcement earlier on Tuesday that he had signed the so-called “Hong Kong Autonomy Act” into law.

Apart from the Act, which envisions sanctions against politicians who the US has accused of “extinguishing”the former British colony’s freedom with a new national security law, Trump also signed an executive order stripping the territory of its special trading status.

Both the Autonomy Act – a bill that blazed through Congress with bipartisan support – and the executive order seek to penalize Beijing for alleged rights abuses in Hong Kong.

Beijing, which insists that the new security law was needed to “protect national sovereignty,” has denounced the US rhetoric and punitive measures as an attempt to “obstruct”the implementation of the law, insisting the US “will never succeed” in pursuit of that goal.

The Ministry said China would not sit idly by and warned it would respond in kind.

In order to safeguard its own legitimate interests, China will make the necessary response and impose sanctions on relevant US personnel and entities

Published on Tuesday evening, Trump’s order will “suspend or eliminate different and preferential treatment for Hong Kong,” including in the realms of national security, foreign policy, immigration and economics, rescinding a special arrangement established with the city under the 1992 Hong Kong Policy Act. The previous law allowed Washington to treat Hong Kong as a separate entity from Mainland China, especially in matters of trade.

Beijing has repeatedly demanded that the US refrain from meddling in its internal affairs, saying that if Washington fails to back down – which, so far, it has shown no intention of doing – retaliation would be swift.

Hong Kong affairs are purely China’s internal affairs, and no foreign country has the right to interfere… If the US side sticks to its will, China will definitely respond.

Tensions between Washington and Beijing have soared over the last year, with the US rolling out a steady drumbeat of allegations and policies targeting China, including a trade spat which nearly erupted into a tariff war, claims of rights abuses in Hong Kong and Xinjiang, the routine deployment of military assets near disputed territories in the South China Sea and accusing Beijing of concealing information about the coronavirus in the early stages of the outbreak. Though China has denied each allegation in turn, the flurry of hostile rhetoric and actions has prompted Beijing to retaliate in some cases, most recently barring multiple US lawmakers from entering the country following a similar move by Washington.