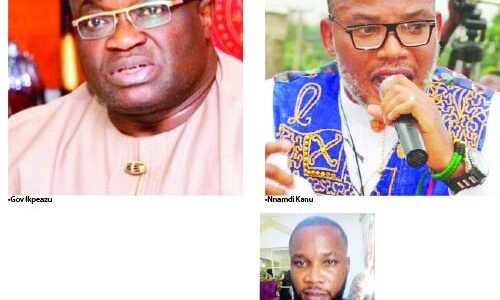 Abia State governor, Dr Okezie Ikpeazu was reported to have recently said that he was willing to dialogue with the leader of the Indigenous People of Biafra (IPOB), Nnamdi Kanu.

In this interview, the younger brother of the IPOB leader, Emmanuel Kanu said that his elder brother can only come to any dialogue table in his capacity as leader of IPOB and nothing less.

He also reacted to President Muhammadu Buhari’s comment, describing IPOB as a dot in a circle. Excerpts:

Well, my brother is prepared for any kind of discussions, he believes also in dialogue, there is no restriction, not at all. He is not restricting anybody from speaking to him, he listens to everybody.

The governor was quoted as saying he would not like to dialogue with your brother as IPOB leader, but as citizen of Abia State. Would he (Nnamdi Kanu) accept that?

The question should have been, is Okezie Ikpeazu not an IPOB member? Is he not an indigenous person? Even you as a reporter, are you not a member of Indigenous People of Biafra? All of us are, it’s as simple as that. Just like Arewa is there, Oduduwa is also there, so, we are Biafrans as well and nobody can change that.

Then, can your brother agree to dialogue with the governor as an Abia citizen other than IPOB leader?

The thing is, no matter how you look at it, nobody can change that narrative, we are all Biafrans, it is as simple as that.

On the part of Nnamdi Kanu, are their arrangements in place for this dialogue, is he prepared for it?

That I’m not in a position to say for now. I think if and when they are ready, of course, my brother who is the leader of IPOB, will be stepping forward for the dialogue.

The question remains whether Nnamdi Kanu will accept to go to the dialogue table not as IPOB leader?

Of course, he is the IPOB leader and that cannot be changed because he wants to dialogue with anybody. He will always come to any dialogue table as the leader of IPOB.

If in the course of the dialogue your brother is asked to drop the struggle for Biafra, do you think he will agree to back down?

Nobody likes struggle in the first place. Struggle comes as a result of subjugation, oppression and suppression. Where there is equity, fairness and justice, do you think there will be any struggle? That’s the way it is. So, whoever comes to him, must bring something to the table. In all, I think there should be round table discussion, general discussion and until that is done, I don’t see any headway.

One is not asking you to preempt your brother, if dropping the struggle would be central to the discussion, do you think he will agree?

On whatever condition maybe?

It can’t be on whatever condition, there must be a dialogue, there has to be a discussion. It is the outcome of the discussion that will determine or not whether the struggle will continue.

That the Igbo are marginalized is a known fact, but if they say today that all those things are going to be addressed, would that assuage him?

Under which country, Nigeria? Are you also aware that they are trying to change Nigeria to United African Republic, it is being debated all over the place. We are even confused. It is entirely up to him and, of course, with the entire IPOB formation to decide the best way forward in the interest of Biafrans not just the Igbo people.

Governor of a neighbouring state said recently that his people are not and has nothing to do with Biafra, but IPOB claims this same state is in Biafra land. How do we situate this?

I think I know who you are talking about, Nyesom Wike and I must tell you that he is simply hullucinating. When they offered to him the post of vice president, he started talking any how, that thing is rubbish, that is what’s happening, but I do know at the end he will come to the conclusion that Biafra is the only way out.

President Muhammadu Buhari recently said IPOB was heading nowhere because it’s just like a dot in a circle. Where do you place that statement?

Dot in a circle indeed, the same dot that produces vehicle for the entire Nigeria, the same dot that feeds the entire nation, it’s the same dot that drives the economy of Nigeria, so, you see how laughable that statement is. We are the light of this nation called Nigeria. Without us in this country, Nigeria will be headed nowhere. In fact, we are a dot you cannot do without, a dot that gives light to the entire nation and Africa as a whole, that’s what we are. Look at how large the earth is, but without the sun or moon which are like dots in it, will there be any light? Look at what’s giving light to the entire earth, just a small dot, that’s what we are. The dot the president was talking about is the rising sun that will never go down.

There has been insecurity in the Southeast like we never had before and IPOB/ESN have been accused for this. What’s actually the true position?

You know, whatever that happens now in Nigeria, they say it’s IPOB. Even if a goat dies now in Katsina, they will say it’s IPOB. But what they have ended up doing is advertising that name, IPOB for no reason. IPOB is a very peaceful movement that believes in the freedom of mankind. ESN is in the bush, protecting the forest of Biafrans. Their duty is to make sure they get rid of terrorists in our land, that’s all they do, nothing more than that.

Some people are of the view that since it was formed, ESN has not attacked or arrested any killer herdsmen, rather they are destroying establishments in their own territory. Could that be true?

All I know is that IPOB is a peaceful movement that stands for fairness, equity and justice. Like I said earlier, ESN is just there to get rid of terrorists in our forests and that’s what they have been doing over time and they’ll continue to do so.

Someone’s house was burnt at Ohafia and they accused ESN of being responsible. If it’s true, could that be part of their mandate?

Have they conducted any investigation? There must have to be investigation before there is conclusion. Inasmuch as that has not been done, I see that report as something that does not interest me personally. The first thing is to carry out a detailed investigation to confirm what happened. You make no mistake, there could be other politicians the man in question may have issues with.

I think the leadership of IPOB replied them. From what I understood, they denied them; it was made clear they didn’t know who was Dragon. In the case of Ikonso, IPOB did not deny him, you saw my brother, he made a broadcast that Ikonso was a unit commander and that he was killed. But that of Dragon, you saw his position as well. The in thing now is that whoever dies in Nigeria, they will say it’s an IPOB member. What about the young men they killed at Umuagu, Umuahia and tagged them unknown gunmen? Investigations so far have proven that they were never involved in any such activity. But why were they killed? You kill people, you tag them unknown gunmen. Do you know the funny thing about that, this man the kids were killed is also an APC chieftain, are you aware of that? He is the Ward 3 chairman of APC in Umuahia.

What do you think is the way forward for all these things?

The way forward I keep saying is dialogue. How would you dialogue with the Fulanis, you call them repentant Boko Haram, at the end of the day you arm them as well, recruit them into the army to fight for you, who is deceiving who? The level of strength the army is trying to use here in the Southeast and parts of South-south as well, what stops them from taking it down to the North, use the same measure and crush them. Why is everybody interested in the Southeast, the little dot? So, I think their mission is to come here, kill us and take possession of our land and nobody will have that, it’s as simple as that, it’s not going to be possible.

0 comments on “Biafra: IPOB gives condition for leader to dialogue with Gov Ikpeazu”