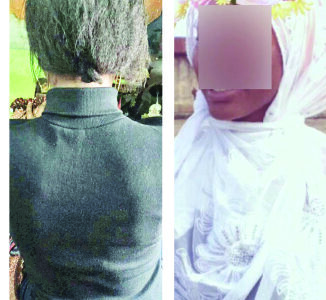 • How I urinated, defecated on my body during the act – Victim

• Cries for justice, alleges police attempt to cover up crime

It was the most brutal act of rape and remembering it feels like being asked to walk through the shards of broken glasses. Till today, talking about it gives her some goose pimples. It makes for a real emotion-wrenching! She only agreed to talk when she was assured that Mohammed Adamu, the Inspector General of Police, does not take such matters lightly and will definitely do something about it once they get to know about it.
Her name is Zainab (surname withheld). When she left her place of work on the 10th of August, 2020, she didn’t know that her life was about to change forever. But the young lady who has been focused on making money and building a better future for herself was shattered after she was raped and dumped by the roadside. According to her, she left the office by 7.30pm and was almost home when her day took a dark turn.

Her walk into danger and defilement
Her words: “It happened around Olateju, Mushin, Lagos. Some men greeted me and made some lewd remarks while at it. I ignored them and kept on walking. One of them accosted me and before I knew it, a tinted glass jeep stopped beside me. A man jumped down from the jeep and threatened me with a gun. He told me that if I didn’t want to die, I should quietly come with them. That was how I was abducted and taken to an unknown destination.”
While narrating her ordeal to Saturday Sun, Zainab said the two men threatened to kill her if she screamed. They lied that they just wanted to talk to her. She started begging them to spare her life.
“I begged them to let me go because I don’t know them and I don’t know why they want to talk to me. I told them that my mum was waiting for me at home and she would be worried if I don’t get home on time,” she said.
But they continued harassing her with the gun, telling her that if she didn’t keep quiet, they will waste her life. They took her from Mushin to Omole Estate, in Ojodu area of Lagos and moved her into a house where she was subjected to bouts of violent rape several times by the man in the jeep. He was later identified as Babatunde Qudus.
The lady reports that the act was so traumatic for her that she urinated and even defecated on her body. Yet her alleged rapist didn’t care. He left her in the house until morning. Thinking that she might not survive the ordeal, given her state, he then asked his driver who was identified later at the police station as Bankole Kamoru to take and dump her on the expressway.

Rescue, treatment and arrest
It was from there that Zainab, with the help of some kind-hearted Lagosians, was able to call her mother who was already worried that she didn’t come home the previous day. The incident happened on a Monday and she was dumped on the expressway on Tuesday morning.
Amid tears, the young lady told Saturday Sun that on the same day she was rescued, she and her mother reported the matter to the police. On Wednesday, she was referred to an NGO, Women at Risk International Foundation, WARIF Centre, for treatment. She did medical tests and since then had been on drugs to prevent sexually transmitted diseases and HIV, while she was also counseled by a seasoned counselor.
A week later, detectives, acting on a tip-off, tracked and arrested the driver of the jeep that conveyed the alleged rapist to his house and brought him to Olosan Police Station, Mushin, Lagos. The case was later transferred to CID, Panti, Lagos.
Zainab said she was happy when the police officer in charge of the case asked her and her mother to come to the station the following day so that they can arrest the alleged rapist with the help of the driver who was then in their custody.

Police inexplicable release of suspect
But her happiness was short-lived as they got to the station and discovered that the suspect had been granted bail. She said she was heartbroken and broke down in tears. She felt disappointed that the only person who might lead the police to her alleged rapist had been set free without her knowledge.
“I started feeling sick when I learnt that they let the driver of the jeep who knew the address of the house where I was raped go without my knowledge,” she said. “My mum started consoling me but I just couldn’t stop crying. The police officer in charge of the case told me that they released the driver so that he could lead them to my rapist. They insisted that they are still carrying on with their investigations.”
So they said. But one month later, the suspects are still at large and her case is gradually fading. Zainab told Saturday Sun that she wants justice. She said since the incident happened, she has not been eating and sleeping well. Moreover, she has become paranoid and dreads going out for any reason whatsoever. In fact, she has been working from home.
“I want justice,” she said. “I don’t want them to get away with what they did to me. They destroyed my life. I am traumatized and can’t even sleep. I was violated due to no fault of mine. I want the perpetrators to pay for what they did to me. I am asking for help”, Zainab added.