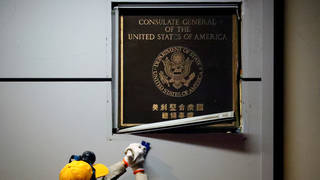 A US national flag was pulled down as American staff left the US Consulate General in Chengdu, after Beijing ordered Washington to close its diplomatic office in a tit-for-tat response for the closure of Houston facility.

“At 10am on July 27, according to the Chinese side’s request, the US Consulate General in Chengdu was closed,” the Chinese Foreign Ministry announced on Monday.

After American staff left the premises, Chinese authorities “entered through the front entrance and took it over,” the ministry said.

Chinese media shared videos of a US flag being lowered around 6:18am local time, as the deadline approached.

Beijing called the closure a “legitimate and necessary response” to Washington’s “unreasonable actions” in regard to its diplomatic facility in Houston, Texas.