‘Do not repeat this mistake:’ Israel’s Netanyahu threatens Hezbollah after group denies ‘infiltration’ at Lebanon border 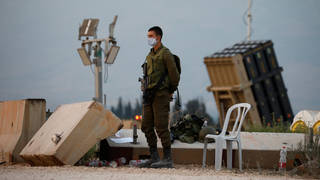 An Israeli soldier stands guard next to an Iron Dome anti-missile system near the Israel’s northern border with Lebanon, July 27, 2020 © Reuters / Amir Cohen

Israeli PM Benjamin Netanyahu has warned Lebanese Hezbollah fighters not to test his military, and Defense Minister Benny Gantz has promised a powerful response, after a bout of shelling on the Israel/Lebanon border.

Israeli forces opened fire on the disputed Shebaa Farms area along the Lebanese border on Monday, responding to what they said was an infiltration attempt by a “terrorist cell.” Israel Defense Forces (IDF) troops say they blasted the infiltrators with machine guns and tanks, and managed to thwart the incursion.

Although witnesses from Lebanon contacted by Reuters verified the Israeli story, Hezbollah officials denied an infiltration attempt, saying in a statement that Israeli forces had taken “nervous action” and fired upon the Shebaa Farms themselves.

In a televised address from Tel Aviv on Monday evening, Prime Minister Netanyahu insisted that Hezbollah were lying and the infiltration attempt was genuine. Netanyahu warned the Shi’ite military group that it is “playing with fire,” and stated that “Hezbollah and Lebanon bear full responsibility for this incident and any attack from Lebanese territory against Israel.”

Defense Minister Benny Gantz – appearing alongside the PM – threatened that any operation against Israel will draw a “powerful” military response.

the Lebanese militants actually crossed the border or not on Monday, Israel has been preparing for a confrontation for several days now. Reinforcements were surged to the frontier last week after Israeli warplanes killed a Hezbollah fighter in Damascus, Syria, an act that the militants promised to avenge.

Although Hezbollah denied crossing the border on Monday, a spokesman for the militia said that retaliation for the airstrike will still “definitely come.”

Israel and Hezbollah last engaged in open war along the border in 2006, with the month-long conflict killing more than 1,100 Lebanese and 165 Israelis. Since then, sporadic exchanges of fire have broken out, most recently in September 2019, when the Shi’ite militant group launched a volley of rockets into an Israeli military base. Israel responded with an artillery barrage, and no casualties on either side were confirmed.

0 comments on “‘Do not repeat this mistake:’ Israel’s Netanyahu threatens Hezbollah after group denies ‘infiltration’ at Lebanon border”