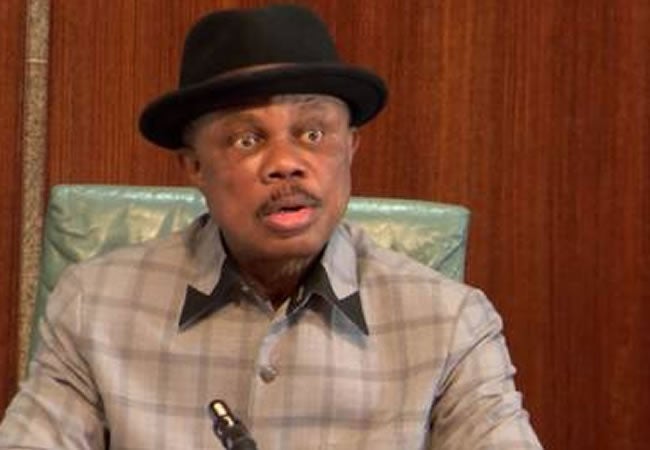 Anambra government said the coronavirus index case in the state was being taken care of at the Protective Care Centre at the General Hospital, Onitsha.

Commissioner for Health, Dr. Vincent Okpala, said in a radio programme that of the 14 samples sent, 13 returned negative.

He assured that there was no cause for alarm since the identification and contact history of all secondary contacts were ongoing.

“As at April 12, we have 28 contacts, the family, friends and business associates of the index case have all been contacted. We have also decontaminated all those facilities he had access to before we took the index case to our Protective Care Centre, based on Nigeria Centre for Disease and Control (NCDC) and WHO guidelines.

“The state has no problem when it comes to tests, when you call our Emergency Operation Centre numbers and if we take samples, the result comes out within 24 to 48 hours. If we collect the samples, fill the form and send to the test centre that is where the level of our control stops. The results will be sent to us, while the NCDC announces it to the public.

“It is not for the interest of the public to know who the victim is, but for that of the Health Ministry, which I am the head as the Commissioner. I led the team that took the index case to the Protective Care Centre and I made sure the fellow was served the favourite food — plantain porridge and fish at around 7.30am before I left. I was there on April 12 to see and monitor the health status, and will also do that on daily basis until the fellows recovers,” he said.

The commissioner said the state was working  hard to have its own test machine.

Okpala pleaded with Ndi Anambra to stay at home noting that if all measures were being applied religiously that the state would be free from getting more victims.

The Association of South East Town Unions (ASETU) has tasked governors in the region to ensure the establishment of more testing centres for the COVID-29.

It also noted that the pandemic has caused a lot of hardship to families in Nigeria while commending the efforts of the South-East Governments on how they were responding to the pandemic.N

A statement by National President General of ASETU, Chief Emeka Diwe and National Secretary General, Chief Gideon Adikwuru particularly extolled Governor David Umahi of Ebonyi State for being the only Governor in the region that built a virology Centre that was recently upgraded to COVID-19 testing centre.

Part of the statement read: “ASETU observes with dismay that one testing centre for COVID-19 is grossly inadequate for the South-East zone. ASETU hereby appeals to other South-East Governors to provide more COVID-19 testing centres in the zone if possible in a way that is spread out in the zone for easier access by people.

“ASETU commends the move by the Federal Government of Nigeria (FGN) to handle the global COVID-19 pandemic across the country. However, we note with dismay the conspicuous absence of the South East from the mapping of isolation and testing centers. More support will be needed to better preemptively prepare all zones of the country for the spreading pandemic – it is better to build up the capacity of each zone to handle the crisis before the crisis erupts.”

Tension is brewing in Umuchu community in Aguata Local Government Area of Anambra State as policemen enforcing COVID-19 lockdown order in the area allegedly attacked Mr Mokwe Henry with rifle and busted two of his tyres.

Mokwe, in a video which streamed live on Facebook, alleged that the policemen had attacked him and busted the tyres of his car for his refusal to bribe them before he could be allowed to pass through.

It also showed some of the police officers at the scene, the victim narrated that he was driving to a nearby bank in the area to withdraw money which he would use to buy food while observing the lockdown order by the state government.

“I was going to the bank to collect money. As I am telling you now, the police, all of them are here. The man has already shot my two tyres. And they are saying that I neglected the command the government has given.

“But as you can see within this area now, you can see the people watching. Is there anything showing that there is no movement in this particular place? This is market and it is full”, he said while pointing his camera on other road users and the market.

Police Public Relations Officer in the state, Haruna Mohammed, said the Commissioner of Police, John Abang, was “deeply saddened by the alleged incident…and has ordered for discreet investigation into the matter.”

Foodstuff sellers in Anambra have expressed delight and gratitude to Gov. Willie Obiano for reopening food item markets earlier relocated to some designated fields in communities across the state.

The governor had given the directive as part of the governments initiative at stemming spread of the COVID-19 pandemic.

Obiano had few days ago established and designated some fields for sellers of food items in all the communities of the state to carry out their businesses.

The move was part of measures at enhancing social distancing and hygiene as the state faced lock down period following the outbreak of Coronavirus disease (COVID-19) in the country.

However, the governor on Tuesday, directed reopening of all food items markets while noting that the introduction of field/stadium makeshift markets aided congestion and defeated the primary aim of social distancing.

Obiano also directed that the foodstuff markets be opened from 8:00a.m. to 3:00p.m. daily until further directive was issued.

Reacting to the development, Mrs Nkiruka Nwakaego, a foodstuff trader at the popular Ose Market in Onitsha while expressing her happiness, said the earlier decision had affected her business negatively.

Another trader, Mrs Theresa Nwankwo, said the fields were not spacious enough to accommodate both traders and goods.

A civil society organisation, Initiative for Ideal Development and Emancipatory Leadership in Nigeria, (IDEAL-Nigeria) has raised an alarm over a quite notice issued by a landlord in Abia State to a man alleged to have contracted COVID-19.

Executive Director of IDEAL-Nigeria, Innocent Nwokocha, yesterday, alleged that the residents’ association of Adimorah Street by Asa Triangle Aba and the landlord of  Mr. Miracle Umunnakwe, have demanded that he vacates his apartment and the area.

Nwokocha said  Umunnakwe ordeal with his landlord and residents started after he invited the National Centre for Disease Control (NCDC) to  test him of COVID-19.

“A young man who would have appeared as the first test case of COVID-19 in Abia State was seriously stigmatised and given a quit notice by his landlord and members of his street because he opened up that he felt he had the various outlined symptoms of the disease.

He was equally harassed by members of his street in Aba for fear that the entire street would be rounded up and subjected to group isolation and subsequent quarantine by NCDC. The landlord ignorantly is still insisting that he parks out of his compound.”

He urged the government and community leaders to launch an aggressive sensitisation campaign against the stigmatisation of suspected COVID-19  patients.

Residents of Onitsha and environs have been engaging in panic buying of foodstuff and other household items following the total lockdown of Anambra State over the COVID-19 pandemic.

Governor Willie Obiano in response to an index case in the state last Saturday directed that food markets be opened daily between 8am and 3p to enable residents make their purchases.

At the Ose Market tens of  people were seen trooping in  to make last minute purchases of foodstuff and other essential items.

Obiano said the lockdown was invoked to stop movement, which invariably would curb the spread of COVID-19 pandemic due to the index case in the state.

Mrs. Judith Nwogbo, a housewife,  said the lockdown caught them by surprise and did not anticipate a total lockdown after two weeks of markets closure, adding that it will cause serious hardship to the residents.

Mrs. Chinwe Obike, who was seen hurrying out of the market, when accosted, complained of the high cost of foodstuff in the market.

Chukwulobelu said the items  donated  covered a number of things hospitals in the state would need to attend to patients.

Anambra Commissioner for Health, Dr. Vincent Opkala,  described the items as a great gift to the state. Chief Medical Director of NAUTH, Prof. Anthony Igwegbe,while receiving the donation said what Cutix Plc had done for the hospital, the university community and society could not be easily quantified.

Imo State Governor, Hope Uzodinma, has ordered the immediate payment of March pension to beneficiaries even as he warned that his administration will not condone the disbursement of monies to ghost workers.

The governor’s directive came on Tuesday after a closed door meeting with the leadership of pensioners union in the state.

A statement by the Commissioner for Information and Strategy, Declan Emelumba, said the delay in the payment of March allowances was caused by the government’s determination  to flush out fraud from the pension scheme.

He said when the governor assumed office in January, the local government allocation was N3.8billion from which N1.6billion was left after the payment of salaries and pensions.

“Surprisingly in February with the same allocation only N900million was left after the payment of salaries and pensions. How can this be explained when no new staff had been employed by the local governments. It is curious that some local governments with less staff were carrying a wage bills higher than those with more staff; how can Owerri municipal council with higher number of workers be paying N15million as salaries, while Ihitte Uboma with less staff is paying N56million,” he queried.

Emelumba said the state  had saved over N300million through detailed scrutiny of  the pension pay roll which exposed a lot of leakages and ghost recipients in the system.

Meanwhile, Chairman of the Imo Association of Pensioners, Dr. Josiah Ugochukwu, has alleged that the use of consultants to handle the pension scheme  by former governor  Emeka Ihedioha was a plot to defraud pensioners.

“The use of a consultant was a ploy to defraud the state by opening avenues for questionable payments of over half a billion naira to an external consultant who by law cannot be audited by the state Auditor General. There was practically no role for a consultant in payment of pensions. The governor sees pension money as blood money because it is money saved from the sweat of elder statesmen who sacrificed their youth to serve the state,” Ugochukwu said.

Culled from The Sun