Deluge of renewed agitations for restructuring 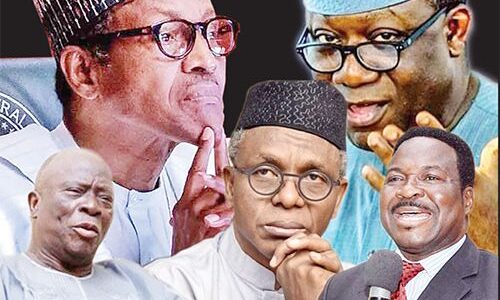 he spirit of agitation for restructuring of Nigeria came alive again, last weekend, during the zoom interactive session held by the Southern leaders.

Though with stiff resistance from the government at the centre, concerned statesmen, who had genuine conviction that the country could not stand as it is, made it clear that they were not about to abandon the age-long campaign for a re- turn to true federalism.

Rather, they see it as the only way to pull back the country from the brink. It is an aspiration they desire so much to see it come true in their lifetime.

But time, they say, is of essence. For the umpteenth time, they renewed the call for a revisit of the 2014 National Conference report to save the country from an imminent break-up. Though the interactive forum was aimed at strengthening the new found unity between the Yoruba and the Igbo, discussion on the urgent need to devolve power to the federating units took the front burner.

Speaking separately during the inter- active session on consolidation of hand- shake across the Niger, prominent leaders of thought maintained that the wheel of progress would remain permanently stalled unless President Muhammadu Buhari have a change of mind and put the necessary modalities in place to address some of the key issues raised in the report.

The renewed call followed the recent EndSARS protest, which further opened the fault lines between the North and the South. The southern youths had held weeks of peaceful protests against police brutality and the excesses of the Special Anti-Robbery Squad (SARS), but their northern counterparts looked the other way.

In the wake of the protests, the Chair- man of Northern Governors’ Forum, Solomon Lalong, introduced intrigue into the show when he declared that the unit should not be disbanded in the North because of the insecurity in the region.

To some political pundits, such pronouncement, coupled with the total abstinence of northern youths from the protest was a confirmation of the fact that Nigeria is not one country.

A renowned human rights lawyer, Chief Mike Ozehkome, expressed this view, while reacting to the statement credited to Lalong.

He said: “If the North says they want SARS, and the entire South-south, Southeast and Southwest say they don’t want, it is a reaffirmation of the urgent need for the restructuring of Nigeria that we have been talking about.

“It means that the requirement of one state or region are not exactly the same with others. This is the reaffirmation of the urgency of now and yesterday to urgently restructure Nigeria and allow each state and each geo-political zone to do things the way they deem fit.

“The Southwest has started Amotekun, the Southeast and South-south, as well as the Middle Belt should start their own. This will not in any way mean that Nigeria has balkanised. It simply means that like the United States of America, every state does its own thing its own way.”

The same issue had equally attracted the concern of Ekiti State governor, Dr Kayode Fayemi, and his Kaduna State counterpart, Nasir el-Rufai, during the 50th anniversary lecture of the Centre for Historical Documentation and Research (Arewa House) in Kaduna.

In their separate lectures, they both examined some of the recent developments in the polity and came to the conclusion that stability of the country could only be achieved through restructuring.

Fayemi put his view thus: “Those of us in public office may delude ourselves, but the events of the past few weeks have brought the contradictions of the Nigerian state into a sharper focus. Whether your immediate concern is police brutality and the need for police reform or you reflect upon the rationale and the challenges of those who insist that unless and until Nigeria becomes a theocracy, there shall be blood and tears unlimited; whether you look towards the Niger Delta, where de- spite the amnesty and the industry of graft and greed that it has re-produced, there is a continuous and bloody demand for justice and equity; or you examine the end- less pretexts for ethnic strife and blood- letting between the so-called indigenous people and the “settlers” in the Middle Belt; whether you scrutinise the regular apocalyptic predictions of highly placed Nigerians about the fate of the country, or you contemplate what would happen if measures are not taken to arrest the drift, you cannot, but come to the conclusion that Nigeria needs to be re-created.

“In our quest towards a more perfect union, therefore, the main challenge is one of re-creating the union and the basis of its fundamental national association.”

The host governor, el-Rufai, in his own address, did not only blame the ruling All Progressives Congress (APC) for the delayed implementation of the report of the committee on restructuring, which he headed, but also warned of the dire con- sequences of the failure to do the needful.

His words: “I will not hesitate to admit that I am passionate about what constitutional framework will best enable the promise of this country to manifest. I had the privilege of chairing the APC Committee on True Federalism with membership across the political and demographic spectrum to layout our party’s roadmap for our nation’s greatness. In its report, that committee defined the values that, in its opinion, promote and connote true federalism and proposed a clear roadmap for implementing the recommendations.”

Accordingly, he charged the National Assembly Ad-Hoc Committee on Constitutional Review to take advantage of the report and initiate the process that would facilitate restructuring of the country without any further delay.

On Thursday, a former President of the Nigerian Bar Association, Dr. Olisa Agbakoba (SAN), also joined the fray with his treatise to the National Assembly on the way to achieve the desire for a true federal system.

In a letter dated November 4, 2020, he suggested power devolution as an antidote to the incessant agitations.

He succinctly put his argument: “It is clear that because of her diverse nature and large size, the political system best suited for Nigeria is a federal system.

“But the challenge has been what type of federalism. Many proposals, including restructuring, have been put forward without success. I believe there is a simple solution. This is devolution of powers. The Constitution has two legislative lists namely, Exclusive and Concurrent. These lists have 98 items of powers.

Agbakoba said, as president of the NBA, he worked with the Forum of Federations, which reviewed diverse models of Federalism, which could be of assistance to the National Assembly.

But regrettably, all this seems to have met a deaf ear as the Special Assistant to the President on Media and Publicity, Garba Shehu, accused those agitating for restructuring of making unpatriotic call for a breakup.

A chieftain of Afenifere, Chief Ayo Adebanjo, while reacting in an interview with Sunday Sun, said that the refusal of President Buhari to heed the call for restructuring had confirmed the views of some Nigerians who accused him of promoting fulanisation agenda in the country.

“As I said elsewhere, if respected Nigerians like Pastor Adeboye, Prof Wole Soyinka, Aare Afe Babalola, President Olusegun Obasanjo, Chief Edwin Clark, Cardinal John Onaiyekan, Chief John Nwodo, Dr Pogu (Bitrus) and many other distinguished Nigerians have called for restructuring of Nigeria to avert an imminent break up and the presidency decided to resort to a blackmail or intimidation, then President Buhari has confirmed the view of patriotic Nigerians who have accused him of not being interested in a united Nigeria, but in his private agenda of Fulanisation of Nigeria.”

He noted that the country was on the verge of collapse with the way things were going.

Also, Founder, Igbo Youth Movement (IYM), Elliot Ugochukwu-Uko, while lamenting the uncompromising attitude of President Buhari, said that he did not see restructuring happening under the present administration.

He said: “Everybody knows the oppressor won’t give up holding others down. He will only do that reluctantly.

“The cabals opposed to restructuring are in power. Therefore, they will scheme for a perverted and watered down ver- sion of restructuring.

“They are trying to use the National Assembly to amend the constitution and grant state police, rights to states to mine solid minerals in their domain and pay tax to the centre and then maybe one additional state to the Southeast.

“But their version will not restore peace in the land. A renegotiation of our union is the only solution. Every region must be given a sense of belonging by making contributions to the new people’s constitution.

“Reports of past national conferences should be revisited and the people should decide the form of government and the tenure of our leaders.

“Those who are afraid of power devolution and true federalism are the ones responsible for the anger and uncertainties in the land.”

Prof Remi Sonaiya, a former presidential candidate of Kowa Party in the 2015 general election, also corroborating the same view, said that only restructuring could guarantee genuine development of the country.

According to her, the present structure cannot sustain unity as it has created injustice in the system.

She argued: “I am a firm believer in the fact that the system that we are currently running, this centralized unitary system is not working. It is a reality that we should face and come up with an alternative.

“A powerful central government where everything is decided in Abuja is not to our advantage. We will continue to be an undeveloped country because of it.

“If we had a better arrangement that will let every area generate and control its resources, we will find out that we will become a better country, we will become more prosperous. But in this arrangement where everyone is just looking up to Abuja for sharing patronage, distribution of oil wells, it’s clear that this structure is not working.

“We are not running true fiscal federalism. This was not how Nigeria was before and we should be able, to be honest with ourselves, and say that this system is not helping us, not working.

“It’s time we tell ourselves the bitter truth that this system is not working, will not work and will not take us anywhere in terms of genuine development unless we restructure.”

With or without a positive response from the authorities, it has become obvious that the clamour for restructuring is no longer an agitation that can be wished away. It is only a question of time. As they day, nothing can stop an idea whose time has come.

0 comments on “Deluge of renewed agitations for restructuring”