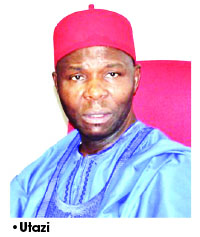 Senator Chukwuka Utazi represents Enugu North Senatorial District in the National Assembly. In the 8th Senate, he headed the Committee on Anti-corruption, where he supervised the Economic and Financial Crimes Commission (EFCC) and other agencies.

In this interview with Sunday Sun, he spoke on how the cold war between the Attorney-General of the Federation and Minister of Justice, Abukakar Malami, and the suspended acting chairman of EFCC, Ibrahim Magu detailed President Muhammadu Buhari’s anti-corruption war.

You headed the anti-corruption committee that supervised Ibrahim Magu as EFCC acting chairman. Looking at the revelations coming from his ongoing probe, do you think it was a mistake to have appointed him?

I am not in the executive, so I cannot decide for them the type of person they have to employ or appoint to any position. It’s an executive function, it’s their duty. The only issue is that if the person succeeds, the job of executive would have been half done and if the person fails, it’s also a minus for the executive. So, it’s very important that the executive looks very critically at the type of person they appoint. Machiavelli, a political scientist in his book “The Prince”, said “you can judge a leader by his capacity to recruit the right kind of people into leadership. If you succeed in recruiting good ones, you have succeeded in everything. If you fail in that, you have also failed in every- thing.” Once you get the right kind of people into leadership, things will work and when you get the wrong people, things will be upside down, tax payers money with be wasted and you will embarrass the one who appointed you.

Did the face off between Magu and the AGF affect the anti-graft war?

Could one also blame the failure of Magu or the EFCC at the recruitment process, where only police officers are appointed to head the agency?

For me, it depends on the type of person who is appointed. Whether he is a policeman or not, is a secondary thing. But if you have the right kind of person, like Nuhu did a lot of job there and everybody liked it. After Nuhu left, we started having many issues here and there and people started thinking differently. If you ask me as a lawyer, I will advise that the EFCC establishment act should be amended to open the recruitment of leadership of the agency. It shouldn’t just be restricted to the police. It’s an equivalent of assistant commissioner of police. People now interpret it to mean that an Assistant Commissioner of Police must be got from the police to head it. For me, that’s not the thinking. But if that’s the general thinking, then I think an amendment is needed to open it for other security agencies, people who have been in DSS, who have experience in intelligence gather- ing. Because fighting financial malfeasance in the country is not just about policing; it’s about intelligence. You have intelligence in Police, SSS, NFIU, etc. So, such people who have had train- ing in such areas can be picked, but don’t just limit it to police. There’s a Special Fraud Unit in the police force. If it was effective, they wouldn’t have created EFCC in the first place. But because we had issues there, that was why EFCC was established. EFCC and ICPC should have it’s own special training. You can start with police, but along the line, they should have their own training. The agency should not be a police establishment. There are even so many people who have been trained in EFCC, but no one gives them the opportunity to head that agency. Until you get the well trained people to head it instead of making them subject to leaders who are from police, there will be confusion there. So, now that they are doing an overhaul in the system, let it be complete. Let us see what the Attorney-General of the Federation is coming up with in his proposal of amendment of EFCC to bring it to work for the country effectively and efficiently look- ing at other anti-graft agencies world over. And when we do that, the issue of training these people outside the EFCC school should never be. Even the ones that are trained in the Army by the NDA, I don’t understand it. How can you bring people who should work for anti-graft agencies and send them to Army? These people should be trained by the EFCC school which has a curriculum, not bring- ing people from NDA and sending them to the EFCC school for one week. The EFCC school trains people on financial intelligence, NDA does not do that. NDA trains you to be fit. That is not the job of the EFCC. The Attorney-General should stamp his feet and say that those people trained in Kaduna by the Army must be retrained in the EFCC school, so that they will go through the proper training. If we really want these people to work well, we must do these things and gradually, police should go away. The same thing for ICPC, they have their own training school for intelligence gathering. In fact, intelligence gathering is better at ICPC, they don’t have much of police presence. They are gradually phasing out police presence, but at EFCC, its dominant. If you want to go into EFCC, go into EFCC properly and leave police finally and then you will undergo that intelligence training specially done by that school to bring you up to speed with what is expected of EFCC as an agency of government fighting corruption.

You sponsored a bill in the 8th Senate in proceeds of crime. It was not signed into law by the president. The same bill has now been sent back to the National Assembly. The fear is that, if passed into law, EFCC and other anti-graft agencies maybe rendered toothless. Can you explain this point sir?

The issue is not the prosecution of financial offenders. That’s not the issue. What is different is that all these anti-graft agencies that prosecute and seize property, they are keeping them. They man- age them until final forfeiture in the court. The bill I passed in the Eight Assembly, we said EFCC and all the anti-graft agencies don’t have the capacity to man- age these assets. To start with, the Proceeds of Crime bill is a statute of universal application because once you are a signatory to United Nations Convention against corruption (2000), you are meant to do this as a signatory and a state party to that convention. Once you have become one, you pick this legislation and domesticate it to your own environment and it will start working for you. Just like we did the Mutual Legal Assistance. Once you are a signatory and you have that law in your place, it means that if even the United States of America has a suspect in Nigeria here, they do not need to ask the person to be repatriated. They can come here through this agency of the government and get the person prosecuted. Once you have that, you are now one. The same thing with the Proceeds of Crime. It’s the same statutes of universal application. Once you put it in place here, you will know what to do. After getting final forfeiture, or once you just seize as- sets, you add it to the Asset Management Agency created under that law. Its duty is now to manage those assets profitably got by the government and we will get a lot of revenue accrued to the financial account of the country. So, that’s the essence of it. But along the line, we made a lot of effort. I spent a lot of time and energy to get that bill to be passed in the concluding period of the Eight Assembly. But before you know it, the Federal Executive Council was dissolved. Attorney-General was no longer in place. So, who will take charge and who will do what? That was what just happened and along the line, we couldn’t trace who to hold responsible for that. So, now that the Attorney-General has come back here with the bill, we will see how it goes. Because if you don’t sign it at the appropriate time, you have to bring it back. So, the Attorney-General has said that he is re-presenting that bill. So, when the bill comes, we will look at the content, if it’s the same we passed in the Eight Assembly or if it’s a new one, or if there are any other suggestions that he has put in it. But that law is very fundamental in the fight against corruption. It’s also important so that government can profit from the seized assets across the country and across the world. Once you have the asset management body, it is now its duty and not that of the anti-graft agencies to pursue and make sure that such assets in any part of the world are released to the Federal Government.