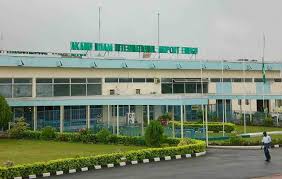 Enugu State government has applauded Ibom Air as it commenced operations at the Akanu Ibiam International Airport (AIIA), Enugu,  with plans to expand to other connecting states in the South East.

The airline which landed at the airport at 9:07am and was saluted by officials of the Federal Airports Authority of Nigeria ( FAAN), Aviation Fire Fighting and Rescue Services ( AFFRS) was welcomed by the Deputy Governor of the State, Dame Cecelia Ezeilo.

Ezeilo said the airline is a welcome partner and will act as a catalyst to strengthen economic activities in the state.

“We are very happy and excited to welcome Ibom Air to Enugu State on its inaugural flight. We are partners in progress and we wish you success as you expand,” Ezeilo said.  The manager for marketing and communications, Essienette Aniekan, said the airline would gradually expand to more states in the coming months and would improve on its unique selling points.

“We are here to position to capture the South Eastern market because Enugu is a commercial hub. Coming here is very strategic because this is an international airport. In the future we will expand to other African countries but for now, we are focused on expanding to many strategic statea in Nigeria and that is why we are opening up rapidly. We started in our home state and moved to Lagos and Abuja then to Calabar when we saw that there was a need there and we will keep expanding and growing,” she said. The Chief Operating Officer ( COO) of the airline, George Uriesi, said that the flight into the airport was planned to serve not just the state but adjoining states as well.

He said, “We have moved from the federal capital, Abuja, to the commercial capital, Lagos, to the Capital of Akwa Ibom, Uyo, then we got into Calabar to get that part of the country and we are in the South east. Enugu is the gateway to the South east and it’s got so many states that use this airport; there’s Ebonyi, Anambra, some parts of Benue State come here to fly up to Ogoja in Cross Rivers State. So the clientele for this airport is huge.