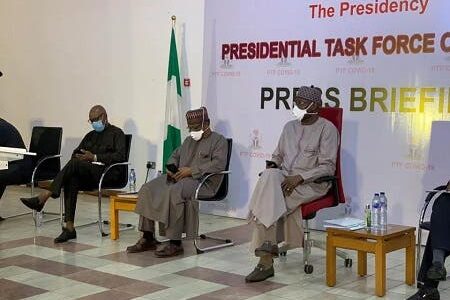 The Presidential Task Force on the COVID-19 pandemic has observed that the impact of the virus has caused the economies of families to collapse resulting in mental health issues, drug use and gender-based violence.

The chairman of the task force and Secretary to Government of the Federation (SGF), Mr. Boss Mustapha, who made the assertion at a media briefing in Abuja on Thursday, revealed that the PTF had been working with relevant stakeholders on the issues arising from the impact of COVID-19.

“It is true that family economies have collapsed, jobs were lost, mental health issues have arisen, some persons have taken to drugs and rape has escalated.

“The solution is to exercise enormous self-restraint, vigilance and the PTF urges that citizens should take advantage of the mental health programmes nearest to them. In Abuja, for example, the Federal Medical Centre in Jabi is the facility to visit.”

Mustapha pointed out that the pandemic has continued to cause disruptions in human activities, stressing the need for testing for the success of the national response.

The PTF boss added: “The COVID-19 pandemic has persisted in the disruption of human activities. We have just received a report that one of the annual events of a critical security agency has ended abruptly out of abundance of caution, due to detection of an infected personnel.

“The significance of this occurrence is that testing is critical to the success of our National Response.

“We therefore urge Nigerian and organisers of events to vigorously pursue the path of testing especially for delegates attending events.

“The PTF recognizes that testing level is still very low in Nigeria. Last week, the country’s COVID 19 infections witnessed yet another significant increase after a period of low numbers.

“The analysis show that the total number of 1,607 new confirmed cases are higher than the numbers recorded in the week of November 29 – December 5 when a total of 1,102 cases were recorded.

“For emphasis, the breakdown of testing nationwide in the last one week by state is as follows: 4 states (Lagos, FCT, Rivers and Ogun) accounted for 64% of all tests conducted; 7 states conducted more than 1,000 tests in last week; Testing increased in 17 states;

States that have not reported a case in at least one week are Abia, Adamawa, Ebonyi, Cross River, Ondo, Niger, and Yobe, he said.

The PTF Chairman expressed regrets that Nigerians, particularly some faith based organisations have continued to hold events of large gatherings capable of spreading the virus.

The PTF, therefore, urged all sub-national entities that signed the protocols with these organisations and have primary responsibility for enforcing the protocols and NPIs to step up their roles of enforcement.

Mustapha revealed that in the next two weeks, the PTF will be submitting its final report to President Muhammadu Buhari.

He added: “This is not the end of the assignment as the virus has not gone away. Similarly, there is the significant issue of vaccine to address in the coming months and years. In recognition of this fact, a suitable transition programme that will take into consideration the multi-sectoral approach will be recommended.”

The PTF also appeal to Nigerians to seriously consider putting on hold all non-essential trips and avoid large social gatherings during the Christmas and New Year festivities.

In his remark at the briefing, the Minister of Health, Dr. Osagie Ehinare, said Nigeria must prepare for a possible second wave of Covid-19 infections.

Towards this end, he said, he has directed all isolation and treatment centres that were closed to prepare to reopen.

He added: “We are seeing the increase in the number of confirmed Covid-19 cases in the last few days, which we have frequently alluded to in recent times. This rightly suggests that we may just be on the verge of a second wave of this pandemic.

“Last week, we recorded 1843 against 1,235 two weeks before that and 1,126 the week before that. In the past 24 hours, 474 new confirmed cases and 2 deaths were recorded, with an indication that this week’s figure will beat last week’s.

“Everyone of us has a role to play in the effort to prevent the explosive spread of this infection in Nigeria.

“While we strive for the best, we must prepare for a possible second wave which we must ensure, does not get to be worse than what we have seen so far, judging from what we observe in other countries.

“The US, UK and other countries are going through very difficult times, and we do sympathize with them.

“To prepare ourselves, I have directed that all Isolation and treatment centres, which were hitherto closed due to reduced patient load, to be prepared for reopening and the staff complement.”