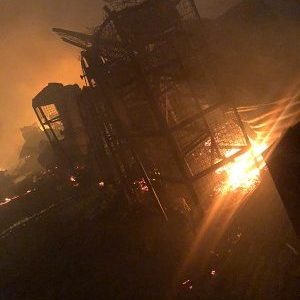 An early morning fire on Sunday gutted 14 shops and 16 kiosks at the Adeniji Adele Market in Lagos Island.

The fire was said to have started around 3am as a result of electrical malfunction in one of the affected shops.

According to the Lagos State Emergency Management Agency (LASEMA), a distress call was received around 3:13am and rescuers raced to the scene within 10 minutes.

“The fire was restricted within affected areas and stopped from spreading further. 14 shops and 16 kiosks were affected.