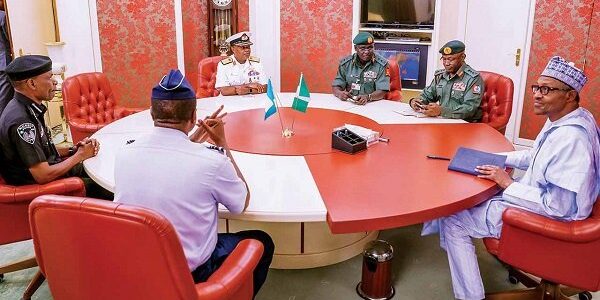 The massacred of some 110 farmers in Kwashebe, Bornu State, presents yet another chance for President Mohammadu Buhari to immediately change the Service Chiefs, the Alliance for the Survival of Covid 19 and Beyond, (ASCAB) said in a statement on Monday.

The coalition of some 80 labour and civil rights groups said the savage killings was a signpost of incompetence and ineptitude on the part of those in power.

“We commiserate with the victims of these savage killings. We stand shoulder-to-shoulder with the victims and their families at this gory moment of grief. The Federal Government must take a drastic action. This should include changing the Service Chiefs”, ASCAB said in a statement  by its Chairman, Mr Femi Falana.

ASCAB said the 110 farmers were killed less than 10 kilometers to Maiduguri, the Bornu State capital underlining the audacity of the terrorists. ASCAB said it is worried that the killings which would have taken not less than four hours to achieve including escaping the scene of crime drew no aerial or land response from all the security operatives especially when the killings took place in broad day light.

The coalition said at present the 180,000-strong Nigerian Army is overstretched with its operations in 33 states adding that the 370,000 police force has not been adequately equipped to deal with armed insurgents by non-state actors. It expressed worry about the implication the killings of the farmers will have on food security and livelihood in Nigeria.

“While the Federal and State Governments are asking people to go back to farm to boost domestic economy, the killings of farmers will certainly imperil community  and individual interest in agrarian economy”, ASCAB said.

ASCAB said it is disturbed by the mass burial given to the victims saying that it does not show honour and respect for the victims of the gruesome murder who deserve monuments to serve as a reference point for grief that has shaken the entire world to its foundation.  The coalition urged the President to take a drastic step beyond rhetoric by changing the Service Chiefs.

ASCAB said “On June 18, 2020, President Buhari finally admitted that the efforts of the Nigeria’s security chiefs against insurgency were not enough. He expressed this in a meeting held with the Service Chiefs at the Presidential Villa in Abuja. Speaking to journalists after the meeting, the National Security Adviser, General Babagana Monguno (retd) said that the President Buhari told the Security  Chiefs that he would no longer take excuses from them and that he expected them to henceforth live up to expectations.” The coalition regretted that the situation has not improved as terrorists, bandits and kidnappers have since taken over monopoly of violence in the country.

In condemning the brutal massacre of 43 rice farmers in Borno State yesterday, President  Buhari disclosed, in apparent exasperation, that the government had given all the needed support to the armed forces “to take all necessary steps to protect the country’s population and its territory.”  Last week, the Sultan of Sokoto, Alhaji Saad stated that  “People think north is safe, but that assumption is not true adding that it’s the worst place to be in this country.

ASCAB expressed concerns that bandits go around in the villages, households, and markets with their AK-47. They stop at the market, buy things, pay and collect change, with their weapons openly displayed. These are facts I know because I am at the centre of it.”

ASCAB said it is an undeniable fact that people living in the southern states are equally terrorised by kidnappers and armed robbers.

The group also called on the President to summon an urgent meeting of the Nigeria Police Council (constituted by himself as  the Chairman, the 36 state governors, the Chairman of the Police Service Commission and the Inspector-General of Police) to address the increasing wave of insecurity sweeping across the entire country. The proposed meeting, according to the group should also resolve to jettison the dogmatic implementation of neoliberal policies dictated by the International Monetary Fund and the World Bank which has plunged the country to another recession.

ASCAB said its members are disturbed to note that the authorities of the Federal and State governments have failed to pay attention to section 14 (2) (b) of the Constitution which prescribes that the welfare and security of the people shall be the primary purpose of government.

“Instead of providing for the welfare and security of the people the governments are united in increasing the prices of fuel, electricity tariffs and social services. Having abandoned governance the leading members of the political class are preoccupied by the rat race for 2023 presidential election when the security of the neo-colonial State is on the verge of collapse”, the group said.

ASCAB said it is compelled to call on the Nigerian people to mount renewed pressure on the Federal, State and Local Governments to address the crisis of underdevelopment manifested in infrastructural decay, insecurity of life and property, unemployment and poverty.