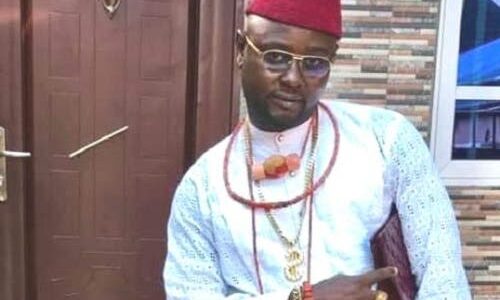 A Prince and Chief in Udu kingdom, as well as his friend, have been killed by yet-to-be-ascertained assailants in Delta State.

Identity of the felled Prince said to be a hotelier was given as Chief Elvis Otedafe Onojerame, popularly known as Prince Kasuwa.

The owner of Widisag Hotel, located in Udu Local Government Area of the state, was killed alongside a friend whose identity is still shrouded in secrecy.

Amid sketchy details, reports say the incident took place at about 2.20 p.m on Sunday near a first generation bank off Udu road.

From horrifying photos of the killing obtained from witnesses, Prince Kasuwa was seen shot in his Benz vehicle.

The Police Public Relations Officer (PPRO) of the Delta State Police Command, DSP Onome Onovwakpoyeya confirmed the killing of the two friends but gave no details.