‘I defy anybody to watch that carnage and not intervene’: David Attenborough’s cameraman tells all

Gavin Thurston has had parasitic worms burrow under his skin while filming in Congo, been slapped by a silverback gorilla and spent the night sleeping next to a deadly puff adder in Sudan. But the most frightening moment, the Blue Planet cameraman tells me over the phone, took place when he was making a programme about rare black rhinos in Namibia, with presenter Saba Douglas-Hamilton.

“I heard this low hoo-hoo sound and I said, knowledgably, to the sound recordist, ‘That’s amazing, there are ground hornbills here!’ You see them normally in pairs of four, they’re a sort of turkey-sized bird. We carried on, got the shot of the rhino… and Saba and the ranger beckoned to us, called us over quite urgently, so we rushed over the camera kit thinking they could maybe still see the rhino.”

“And Saba said to us, ‘There are lions right here. And they’re hunting us now.’ I’m suddenly thinking, s—, how stupid am I? I thought that low sound was ground hornbills – and it wasn’t. It was the contact calls of lions.”

Related Video: Sir David Attenborough Has a Message for the Next Generation 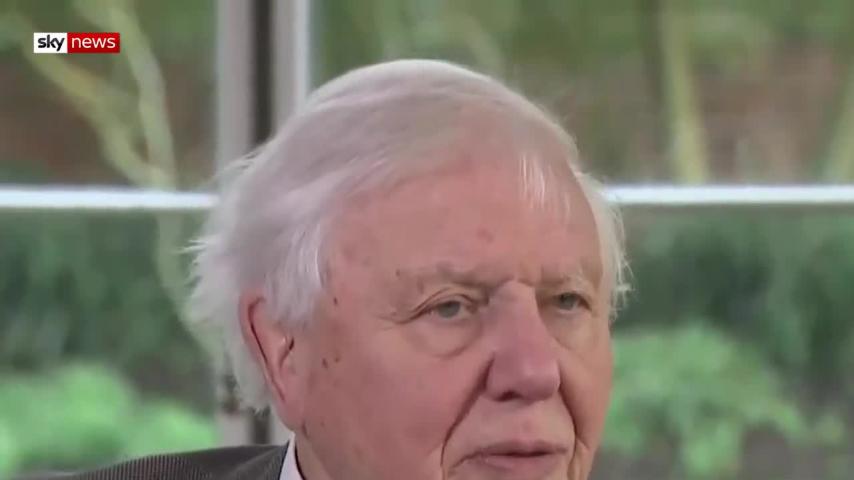 Scroll back up to restore default view.

“Sure enough, no sooner had the ranger put bullets in his gun than this lioness came out of nowhere charging straight at us. He fired a shot over her head, she didn’t slow. He fired another shot in front of her, kicked up gravel in her face and she stopped, but her ears were down, she had this most amazing wild, angry look. She was about 15 feet from us, and the ranger said, ‘Right, we’ve got to get back to the car before it gets dark. You look ahead, I’ll keep my eye on this lioness.’

“There were six other lionesses in the group, and I was scanning the trees, the bushes, looking for these other females, wondering where they could be. That buzz of adrenaline it was almost like taking a performance enhancing drug – all your senses come alive. I could see every blade of grass… When we arrived at the car the other six lionesses just stuck their heads up out of the grass. Even with four pairs of eyes, we hadn’t seen them. They’d been tracking us the whole way.”

You may not know Gavin Thurston’s name, but no doubt you’ll have been dazzled by his work, which includes A Life on Our Planet, Blue Planet II, Planet Earth II, Frozen Planet, and the cult hit Meerkat Manor (the one with Bill Nighy’s wonderfully droll voiceover). He has won five Emmys and three Baftas for cinematography.

My earliest memory of primary school is sitting open-mouthed with wonder as I watched a video of the “Survival” episode of David Attenborough’s 1996 series The Private Life of Plants. (Thurston was its Director of Photography.) In his new memoir Journeys in the Wild, Thurston recalls a similar moment from his own schooldays, when he saw Attenborough’s 1979 series Life on Earth: “[Attenborough] opened my eyes and mind to a magical world. He brought the natural world into our living rooms.”

They’ve now worked together for more than 30 years. “I remember the first time I met him – God, I was so nervous. I was one of those bumbling idiots who don’t quite know what to say.” But Attenborough was impressed by his work. He’s writes of Thurston in the book’s Foreword: “He has endless patience and that invaluable and extraordinary ability to anticipate what an animal is about to do before it does it”. Endless patience is right: he once sat still for 12 hours a day, for 17 straight days, while filming lace monitor lizards.

Working with animals means Thurston is often pondering an ethical dilemma. When filmmakers for Attenborough’s 2018 series Dynasties stepped in to free a group of penguins trapped in a ravine, it prompted weeks of debate in the press. “I would have done exactly the same,” says Thurston. “I find it amazing that some people were angry, saying you shouldn’t interfere… If you think of the damage that man has done to wildlife in general, to help out some dwindling species every now and again? There’s no harm in that at all.”

He sees a clear difference, though, between shuffling snow aside to make a path for some penguins, and actually getting between a predator and its prey. He would always avoid the latter, reminding himself that ‘The predator has to do it – it probably has young it’s got to feed.” But he once made an exception to this rule.

Filming turtles hatching in Australia, day after day Thurston watched as every single hatchling was picked off by gulls before it could make it into the water. After a week of this, he and a colleague finally snapped: “Without saying a word to each other we both got up, gathered as many turtle hatchlings as we could in our T-shirts, and walked down and put them in the sea… I defy anybody else to be in that situation, just to watch that carnage happen time and time again, and not intervene.”

Caging animals is also something he wrestles with. “There is a place for zoos,” he says, but they can’t provide the range of habitats that big, wide-roaming animals like tigers need. “I think we can all relate to this now after this Covid pandemic, what it’s like to be locked up in a flat with restricted movement – well that’s exactly what we’ve inflicted on a lot of these big animals in zoos or in captivity.”

He’s particularly against the idea of keeping orcas in captivity, but he admits he might not have been inspired to take up his career without them: in his memoir, he describes the elation he felt when he borrowed his aunt’s Box Brownie camera at nine years old to take a photo of Cuddles the orca at Dudley Zoo.

Viewers at home, though, sometimes seem more interested in aesthetics than ethics. Recent BBC nature documentaries have come in for criticism over melodramatic music and “fake” sound effects.

“I’m probably one of those people who thinks occasionally the sound is over the top. One thing that maybe we’ve gone overboard in sometimes is the use of foley [artificial effects].

“There are some amazing sound recordists out there – there’s a chap I’ve worked with called Chris Watson, who can literally get the sound of ant footprint… It is possible to actually record most things for real and lay them on. I know that is used a lot in natural history filmmaking, but there’s no reason why we can’t have more of that.

“I think also that occasionally the music is overwhelming – it’s gone very cinematic. And yes a series like Planet Earth, having Hans Zimmer doing the music does give it a very, very grand wildlife viewing experience, but maybe that’s just one type of filmmaking. Maybe there is room to have just natural sounds on a natural history programme, for once.”

For Thurston, quieter, understated moments can be more powerful than grand melodramatic clashes. The best scene he never caught on camera, he tells me, was when he saw a western lowland gorilla delicately catch a butterfly out of the air, and examine it, before letting it fly away.

“If that had been a chimpanzee, it would probably have snatched it, probably bitten it, spat it out and carried on… But that gorilla was very much like a sort of Victorian naturalist, it was just inquisitive, it wanted to know what these things were.” It was a reminder of how similar gorillas’ minds can be to ours. It’s a lovely thought: somewhere out there, there’s a gorilla version of Thurston or Attenborough. Perhaps he should have lent it a camera.

0 comments on “‘I defy anybody to watch that carnage and not intervene’: David Attenborough’s cameraman tells all”