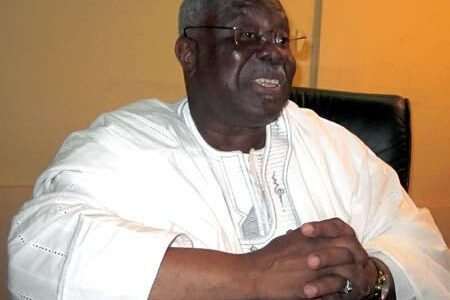 Former Deputy National Chairman of Peoples Democratic Party (PDP), Chief Olabode George, has expressed disappointment over the silence of President Muhammadu Buhari regarding the Igangan attack in Ibarapa area of Oyo State by Fulani herdsmen in which 11 innocent people lost their lives and properties, including the oba’s palace was razed, describing the act as dangerous and made worse by the fact that the president himself is a Fulani.

George expressed this disappointment in Lagos, on Wednesday, in his State of the Nation address, saying the fact that President Buhari is a Fulani man was enough for him to come out and condemned this atrocity or even go further by paying a condolence visit to the community.

“President Muhammadu Buhari silence on the killings of people of Igangan community is dangerous and the fact that he is a Fulani man makes the matter worse. I know his media aids to be very fast in reacting to issues but their silence on this particular incident is very suspicious,” he said.

George, a former military administrator and also the Atona Oodua, equally expressed disappointment with the security situation in the country, lamenting that Nigeria had become fragile at this very moment as the citizens were being confronted with fear, ruin, banditry and freelance murderousness from all corners.

According to the elder statesman, everything seems disturbed, distorted and sliding towards anarchical largeness, saying the blood of innocent people flow in gory sights.

This was just as he pointed out that the killings by the Fulani herdsmen in Ibarapa, which he described as senseless and cruel “in the wee hours of last Sunday has brought the seething malady right to our doorsteps, declaring that: “No one is safe anymore.

“We are back again at a momentous period in the history of this fragile union. We are being pulled everywhere by fissiparous forces. There is fear, ruin, banditry and freelance murderousness from all corners of our beleaguered nation. The blood of innocent people flow in gory sights. Everything seems disturbed, distorted, sliding towards anarchical largeness.

“The senseless killings, the cruel inhuman massacre of the Igangan natives in the Yoruba heartland by suspected herdsmen in the wee hours of last Sunday has brought the seething malady right to our doorsteps. No one is safe anymore.

“I wonder, what hate, what evil, what madness will propel anyone of sane mind to plunge into the night with weapons of war, seeking out fellow citizens for pillage and murder? It puzzles rationality. It benumbs the senses.

“The Igangan massacre is now a watershed in these ceaseless psychopathic killings that now pester our country without let. It will continue to haunt us all,” he added.

Speaking further, the elder statesman affirmed that the Ibarapa incident was an indication that the government at the centre was losing grip over collective protection, saying the Northern Elders Forum (NEF) said this much in their declaration on Monday as the group was of the view that there was a weakening of will and discernment among those who constitute the national arbitrating guidance.

He, however, said the Federal Government can do better, urging that there was a need to refocus, warning that the country must withdraw from the destructive brink, adding: “But the way forward is through fairness, truth, justice and equitable accommodation.

“This much the Northern Elders Forum affirmed on Monday. The NEF is of the view that there is a weakening of Will and discernment among those who constitute the national arbitrating guidance.

“The centre appears overwhelmed, stunned, halted, stalled, puzzled about grappling with the Nigerian challenges. They can do better. We must review our focus and our ultimate horizon. Nigeria must withdraw from the destructive brink. But the way forward is through fairness, truth, justice and equitable accommodation,” he said.

On Twitter ban, he condemned the act, contending that the world is a global village where no one, no matter how powerful can defy the consensus of the free world.

According to him, “The suspension of Twitter is part of the subsisting aberration. It is wrong-footed. It is hasty, unreflective, lacking in contemplative articulations.

“Twitter is in the world stage. It has become a permanent usage where world leaders and youths express their ideological bent. It is the utmost symbol of democratic aspirations. You don’t ban such a symbol of global exchange. You embrace it.

“This hasty decision must be withdrawn forthwith. We need Twitter just as the world is enhanced through the democratic exchange. You do not banish plural contributions. You encourage it. This is our national challenge.”

Chief George, while further lamenting the situations in the country, pointed said there was an urgent need to change from the old way, saying there must be a change of vision through a constitutional overhaul.

This was just as he declared that the 1999 Constitution was the very pivot of the Nigerian malady as, according to him, it lacked fairness, stripped of equitable balance, negates justice and skewed deliberately to favour a section of people of the country.

“Our country is thus bestirred in widening uncertainties. There are no certitudes anywhere as lawlessness defines the national landscape. The very first principle of governance which is predicated on the protection of life and properties is no longer valid. The law enforcement agencies are often exhausted, overwhelmed, sliding into virtual ineffectiveness.

“We cannot continue with the old ways. The system is now devoid of stabilizing balance. We must rework it. We must push towards renewal and rebirth.

“There must be a change of vision through a constitutional overhaul. The present document is the very pivot of the Nigerian malady. It lacks fairness, stripped of equitable balance, negates justice, skewed deliberately to favour a section of our people.

“This is hardly the path of building an enduring society. Great nations are built upon accommodating largeness where everyone must have a sense of belonging. The fair society insists on merit, frowns upon nepotism, encourages participatory inclusiveness, creates equal opportunity for everyone to actualize himself,” he said.

“If our nation must survive, if this democracy must long endure, this distorted system must give way to a new enlightened dawn. This must start with the whittling down of power at the centre, giving the components units more enabling capability to determine their fortunes.

“The states must be made to be self-accounting as they freely develop the tools of economic growth and democratic aspirations. Each state should be allowed to develop at its own pace without the overbearing authority of the centre,” he added.