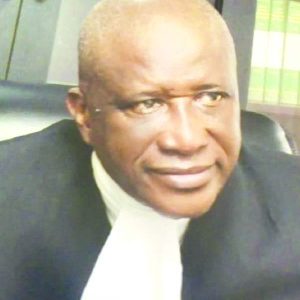 Chief Oba Maduabuchi is a Senior Advocate of Nigeria (SAN) and in this interview with GODWIN TSA, he speaks on some national issues including the on-going debate for an Igbo president by 2023, the current security challenges and  constitutional amendment among others.

The call for rotational presidency has continued to dominate our national debate. Do you support the agitation and clamour for an Igbo presidency by 2023?

You must realize that I am an Igbo man and that is an issue that is very sensitive to us as Igbo. But I am a lawyer, so, I am immune to sentiments and emotions. I look at things pragmatically. The basic principle with respect to politics is that, power is never given, but power is taken.

The first thing we all accept is that power is never given. Power is something you must take. The Yoruba fought the late Gen. Sani Abacha, fought Gen. Ibrahim Babangida, fought everybody until Gen. Olusegun Obasanjo became president. That is the way it is. After Obasanjo became president, the North said, over their dead body, of course, they took power through the late Musa Yar’Adua.

When Yar’Adua died, it slipped into the South-South. The North rose up and say over their dead body, that President Goodluck Jonathan who succeeded the late Yar’Adua  as the then Vice President, will only do two years and hand over power to them, but it didn’t happen.

So in 2015, all known names in the Peoples Democratic Party (PDP) from that region abandoned President Jonathan and joined President Muhammadu Buhari so that power will return to the North.

So the first thing you will ask yourself, is how is the South East strategizing? How are the  Igbo strategizing in order to take power from the North or the West and make it an Igbo presidency in 2023? Dr. Orji Kalu raised his head, but today where is he? He wanted to be president and has started consulting, getting ready, where is he? Senator Rochas Okorocha became interested. He never hides the fact that he wanted to be the president of Nigeria. Same Igbo vilified him and brought him down. It is not only in Igbo land that a different political party has taken over as governor from another party. For example, in Gombe State, the former governor, Ibrahim Dankwambo was PDP and APC’s Inuwa Yahaya took over from him, did you hear of any panel of inquiry set up to make sure that the man went to prison? The first thing former governor Emeka Ihedioha did when he took over from Okorocha was to set up panels, sent the Economic and Financial Crimes Commission (EFCC) after Okorocha to make sure that he goes to prison. Will this kind of altitude engender the kind of unity that will collectively help you to become the president of Nigeria?

In Lagos, former governor  Akinwunmi Ambode did not go for a second term as he was replaced by Babajide Sanwo-Olu. Did Sanwo- Olu send anybody after Ambode? Governor Oluseyi Makinde took over as PDP governor in Oyo State. As we speak, nobody has ever said the former governor, Abiola Ajimobi should appear before the EFCC. It has only happened in Igbo land. That a governor is sworn-in and the first thing to do is to go after his predecessor. Is that how people who want to unite and get the presidency into their fold behave?

The point I am making is that the Igbo do not seem to be properly organized or have the necessary orientation to galvanize themselves and make a challenge for the presidency. If you ask an average Igbo man now, that who is the man you people are proposing to be President in 2023, he cannot name the person.

The person that was always a front runner was the former deputy Senate President,  Senator Ike Ekweremadu. He had the political exposure and national spread. But I would like to be told what his relationship with his state governor is today. That is my state so, I should be able to know. I don’t know whether Ekweremadu and the governor are in good terms because Ekweremadu indicated interest to either run for governor or the Senate and some people are not comfortable with that.

But the whole of South West, as divided and fragmented as they are, they are united in Senator Ahmed Tinubu going for the president. Nobody has told him that he is an old man. Nobody has insulted him. But name one person in Igbo land, and everybody will descend on him.

I as a person, I am the principal proponent of Tony Elumelu to be president of Nigeria. I sat down and thought about it and say, if the Igbo want to bring the presidency to them, Tony Elumelu is the man. But do you know what? Some people told me that he is not a core Igbo man. That he is from Niger Delta. Now look at the North. Late Musa Yar’Adua was from Katsina State, who took over from him as a Northerner? President Buhari. Did anybody stand up to say why are all of you coming from one state- Katsina? You can’t even try it in Igbo land. Look, a man like Tony Elumelu, given his pedigree, his stature, ordinary somebody should be proud to say this man is an Igbo man, let us support him to become the president. But what people are saying is that he is not a core Igbo man .Lai Mohammed is from Kwara state, he was Tinubu’s Chief of Staff. Former Osun State Governor, Rauf Arigbeshola was Tinubu’s Commissioner. The current Vice President, Prof. Yemi Osibanjo was his Attorney General, he nominated him to be the Vice President, it doesn’t matter whether he is from Ogun State. But an Igbo man, no, if somebody comes out, they will say, why is it Anambra, must everybody be from Anambra? So, that is the problem we are going to have in pursuit of an Igbo presidency. Lack of unity, unless the Igbo go back into the drawing board, the Igbo presidency is just a pipe dream and a waste of time, it will never happen.

Do you think the establishment of regional security outfits will curb the menace of banditry in the country?

Yes, to an extent, it’s a way out. Recall that the South West started what they called Forest Guards. But the Amotekun is more focused and better organized. I know in Enugu state, they employed people and pay them stipends  so that they will be giving information regarding activities in the forest. Don’t forget, in the West, they have Agbekoyas, who were the traditional hunters that they used initially in the 1990’s especially along Lokoja, Kabba, Ilorin road, when it was impassable.

It was the Agbekoyas that cleared the armed robbers and bandits from the forest. So we cannot run away from the fact, that somebody who owns the terrain knows it. So Ametokun and other regional security establishments are all an indictment of failure of the police and other security agencies, that you have failed and we don’t have confidence in you.

Do you support the on going constitutional amendment by the National Assembly?  If yes, what areas do you think need an amendment?

However, there are areas one must think about constitutional amendment. One of them is that, the constitution should be amended with respect to our political Jurisprudence. The Independent National Electoral Commission (INEC) conducts election, now, if you are dissatisfied with the conduct of an election and you go to the tribunal, unfortunately or incidentally, when you are at the tribunal, you are now given the duty to defend a result or attack a result as pronounced by INEC, instead of asking INEC to justify its conduct, the way it conducted the election.

Insofar as we allow parties to prove that INEC conducted the election wrongly, and that wrong act of INEC substantially affected the result of the election,  we can never advance because all you need do is to get INEC to make a return in your favour, and the other party or opponent will be running around trying to show how INEC was wrong, instead of calling on INEC to come and explain or demonstrate how the election was conducted in polling unit A, B and C.

The point I am making is that, once somebody makes a complaint about a polling unit, it should be the duty of INEC to come out to say, that place that you are complaining about, this is what we did there, and there is nothing wrong with what we did. Then, I can come out and say no, what you (INEC) is saying is not true, this is what actually transpired at that polling unit.

So far as you throw it upon the petitioner, you can never get victory at the tribunal. The onus should be on INEC to justify its election and not on the petitioner. Even as our law stands today, the onus of proving the affirmative of an issue is always on the proponent.

The second thing is that we must reduce the powers of governors. As at today, a governor determines who is a ward councillor, a Local Government Chairman, a  House of Assembly member, and a member of the National Assembly. That is why a House of Assembly member will always look at the face of the governor before taking a decision. That is why there is no state House of Assembly that has ever said no to a governor. They are usually handpicked. If you are not voted for by the people but simply handpicked by the governor, where will your loyalty and allegiance lie. You don’t need to satisfy the people, you only need to satisfy the governor who puts you there.

Do you think restructuring is the solution to Nigeria’s myriad of challenges?

Now, it will be tempting to say, make the Federal Government to be weak and the regions stronger, but like I always ask people of the South-South, you receive your monthly allocation, you receive money from the federal ministry of environment, you receive 13% derivation. 13% of Nigeria’s economy is given to you to share, if it comes from your place, all the South-South Governors, 13% of Nigeria money is given to them to share and they use it the way they like. Now have you asked yourself, where is the impact of the monthly allocation? Where is the impact of the 13% derivation and the one for environment? That is why we cannot afford to make Governors financially more powerful by the amendment of the Constitution.

The first thing to do is to restructure our political environment. When you do that, the people will become more involved in choosing their representatives and leaders. It is only then that we can now begin to talk of giving more powers to the states financially. Because that is the only time the speaker of a House of Assembly can say Mr. Governor, we don’t understand what you are doing with our money. No speaker can do that now, because the day you do that, it is the day you are impeached. So the first thing to do is not to give them more money, but to rejig our political environment.

One comment on “Igbo not ready for 2023 presidency – Maduabuchi, SAN”

Pls sorry to ask do u know who is San maduabuchi.
No one knws him
I thought as much
A nobody speaking onbehave of Igbo