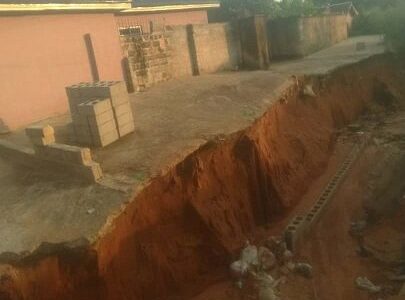 The last may not have been heard of the landslide incident that occurred at Okohia, Akwakuma last week Sunday where over 25 families were trapped and some victims managed to save themselves by breaking through a fence at the backyard.

It will be recalled that the Academic Staff Union of Polytechnics (ASUP) Federal Polytechnic, Nekede chapter, moved in to rescue its member, Mr Emma Ogu of the Mass Communication department, who is also a journalist, by offering him a temporary accommodation.

Ogu and his family as well as some other occupants of the trapped buildings had to rescue themselves by breaking through a part of the fence at the backyard and escaped through a bush path close to a gully-erosion site.

The occupants, who did not find it easy moving out of the building through the bush path, disclosed that they had no choice since they were asked to temporarily evacuate the building by the Imo State Commissioner for Environment, Iyke Njoku, till the place was rehabilitated.

According to one of the occupants who did not want his name mentioned, the commissioner had visited the site on two occasions and promised the assistance of the state government.

The source said: “We had expected them to temporarily relocate us somewhere and at least provide us with some palliative since we have been trapped here for almost a week. Some us depend on our daily income.”

Meanwhile, as the challenge entered the sixth day, some victims were still believed to be trapped in the rubbles.

One of the occupants of the buildings, Ogu, and some others expressed fears that with the magnitude of the landslide, buildings around the area might collapse.

All efforts made by Sunday Sun to reach the Commissioner for Environment, Mr Njoku, was futile, as several calls and text messages were put to his cell phone but to no avail.