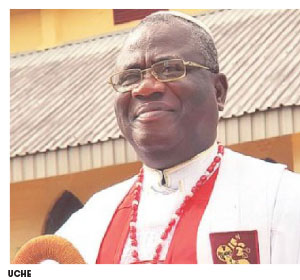 •If govt can negotiate with bandits, why not dialogue with Biafra, Yoruba Nation agitators?

Prelate of the Methodist Church Nigeria, Dr Samuel Chukwuemeka Kanu Uche has said he does not see the Indigenous Peoples of Biafra (IPOB) as a terrorist organisation, contrary to the pronouncement by the Federal Government.

In an interview with VERA WISDOM-BASSEY, he advised the Federal Government to invite those agitating for Biafra and Yoruba Nation for a dialogue. He stated that if government officials could hold negotiations with bandits, there is nothing wrong in also negotiating with those seeking secession from Nigeria. He also advised the Muhammadu Buhari administration to consider implementing the report on the 2014 National Conference, saying most of the challenges in the country were already addressed by the confab.

What’s your take on the inauguration of Ebubeagu, the security outfit by South-East governors?‘

Amotekun is recognised by the South West. We should have Ebubeagu to police our people in the South-East.  I don’t believe that the Indigenous Peoples of Biafra (IPOB) is a terrorist group. And I will plead with the governors of the South-East to summon the boys and ask them to jettison violence and embrace peace.  Those found to be peaceful can be integrated into Ebubeagu so that they can protect our forest and farms. Women no longer go to the farms, because if they do, they are raped and the men are killed.

Sometime ago in England, I saw lands for cattle rearing and ranching. They do everything there and they pay tax to the government.

What we need in this country is a leader that has the mind of God. Personally I don’t mind whether you are Hausa, Igbo or whatever. But I will mind if you are a leader who hates others, a religious bigot, someone who does not want to relinquish office.

In the Methodist Church, for instance, we have a tenure, but I am preparing to go in November. My tenure will expire in January 2022, but I want them to elect a new leader, so that by November I will hand over and it will be done under a peaceful atmosphere. There is peace in the church because there’s no money, unlike the new generation churches where they are sole signatories to the account. We take care of lepers, mad persons, we have schools and so on. But the present day churches are mostly into materialism.

Recently, the Federal Government blamed the United Kingdom for trying to grant asylum to IPOB members. And in the North, some people want amnesty for bandits and killer herdsmen.

It was hatred that makes them call IPOB a terrorist group. I am Igbo. If they can call these herdsmen for negotiations, then call these people and dialogue with them and ask them what the rheir problem is.  If Nnamdi Kanu is not demonised, and you have no intention of killing them, then dialogue with them. I believe they will surrender.  I don’t support what they do, so I am calling for a dialogue with them.  If you want to separate from Nigeria, it is not by using guns. During the civil war, in my family alone, we lost eight men. So I don’t want war, I hate bloodshed, be it Igbo, Hausa, Yoruba, Benin, Idoma, I don’t want to shed a fellow Nigerian’s blood. I weep bitterly when there is any death of any Nigerian.

Personally, I feel that the whole thing initially was politically motivated.  It is manipulation in politics that is causing all these problems.  Some people feel that the best way to get what they want is by causing confusion.  For instance, if you talk about Boko Haram, we all know that Boko Haram started somewhere by a governor who trained political thugs and gave them appointments.  The people you call bandits, insurgents, unknown gunmen are all funded by politicians because of their ambition.

Anybody, Christian or Muslim, that is fanatical, should not be given any office. The whole problem is caused by us.  People are not happy with our country. If people are happy there will be no need to call for division, separation, secession. But things are not happening very well.  I have said it many times, the disaffection is caused by us, by the government of the day.  Why must you appoint people from one side to sensitive positions? What do you have in mind? You said the other person from the other religion is an animal that must be killed. But he was created by God.

In Israel you have a big mosque, the Muslims worship there.  On Saturdays, the real Jews don’t come to the market. They buy things from Muslims and Christians.  On Fridays, the Muslims close the shops for two hours, from 12 noon to 2:00pm. In the evening, you see them coming back to their markets. Go to the United States, you will find Christians and Muslims. Same thing in South Korea. Nobody is molesting anybody.  I think the problem in Nigeria is from us. People have inordinate ambitions. Unless that is addressed, there will be no peace in this country.  We heard that there was a programme by some people who are fanatics, and their target is Nigeria. And their Muslim leaders asked them to come and take over Nigeria. But it will never happen. If you like, take all the men and women and make them security men from one religion. No one tribe, no one ethnic group can take over Nigeria.

The second issue that has aggravated problems is unemployment. Now we are borrowing money, and this borrowed money is on the head of generations unborn.  Those people you are borrowing money for, many of them are unemployed.  They told us they will generate 50 million jobs from agriculture. Have you seen any? They told us that they will generate millions of jobs from oil and gas. Do you see any? People are dying and that is increasing criminality in the country.  I want the government of the day to think properly, whether they are doing well or if they have conscience.  I am talking as somebody who does not belong to any party. But I’m a Nigerian talking for the well being and welfare of Nigeria. I want a Nigeria where peace, equality and justice will reign, nit where some people think they own Nigeria. Why should visitors try to occupy the land? I am opposed to secession.  I am for a Nigeria where there is peace, harmony and justice. From what happened when the North said they are not bringing food to the South, it was self destruction.  They are doing that to themselves because no part of Nigeria can survive without the other.  If we say we cannot survive without the other, it’s in the South. This is where the wealth of the nation is. They want to take over everything.  I want to plead with our brothers from the North to jettison that spirit.  It was Nmamdi Azikiwe that persuaded them to join Nigeria. If not, they would not have joined. Today, they don’t allow our children to study history. If they do, it will help us to know where we came from. There will be no fighting. I am pleading with the Northern part of the country. I talk as a bona fide Nigerian. Nobody should have the spirit of destruction of others.  They should sheathe their swords. Let’s practise tolerance with one another. Let us have a Nigeria of harmony, peace and togetherness.

How can we overcome this problem?

In 2014, there was a national conference. Why do some people sit on that report? Justice Kutigi that handled it was a Muslim. People are sitting on that report. We must come together and say what will solve this problem is a roundtable discussion.  How do we stay together, live together and dialogue on how to live together? Fighting with guns will not help us. If the report of the 2014 conference is implemented, I think that will help us.

Leadership has been identified as Nigeria greatest problem, but all these political leaders attend either churches or mosques. Why have they refused to change?

Satan remains Satan. Has Satan being converted? There are agents of Satan in this county, those agents of Satan are wearing demonic paraphernalia. There are some leaders who are wearing the garments of Satan; they have not changed. They go to church, mosque, but a leopard cannot change its spots. They remain where they are. Unless God touches them, they can never be converted.  Abraham Lincoln, Nelson Mandela brought changes in their countries. If our people are determined to bring changes, they will bring change. Kenneth Kaunda who wrote Africa must be free is a notable man who brought change. People can bring changes. We want people that can bring transformational leadership in Nigeria.

There are churches in nearly every street in Nigeria, yet things don’t work. In some countries that don’t have churches at all, things work. Why is this so?

The point is that Judas followed Jesus for three and half years. But that did not change him and he betrayed his master. So, the church does not change somebody, only Jesus Christ and the Holy Spirit are agents of change. If you are the leader of a church, just as I am, and Jesus Christ has not touched your life, there is no change. You remain a problem to yourself and the people you are leading, I am not condemning any church, but by their fruits you shall know them.  They are not bearing good fruits, that is what I will say. They should change and allow Jesus Christ to touch their lives and if they do, every other thing will be okay around them. That is what I feel.

Men of God are said to face temptations, especially from their female members. How do you cope with such challenges?

You don’t lure yourself into temptation. I have practised for 42 years after training and post training from the theology school. You have to boycott the ‘boycottables’.  If you are a minister and you are not mature, don’t sit with a woman alone. You might be tempted. Don’t practise things that are unseen. Like some young pastors, you don’t touch a woman where you should not touch.  That is why we encourage marriage. I have five sons and two daughters. All I needed and all I need is in my wife. I don’t need to look at any other woman.  And the Bible says, thou shall not commit adultery or fornication.  But if you look at a woman lustfully, you have committed adultery.  I don’t need any woman to mess up with.  I am to have whatever satisfaction, romance with my wife.  I can say that since we were married about 41years ago, none of us have treated any sexually transmitted disease.