Israel Reports a “Breakthrough” Coronavirus Antibody Treatment Could this be a cure, or something close to it?

While a vaccine for COVID-19 could be a year or two away at the very least, many market participants have been pinning their hopes on an effective treatment in the meantime. In a best-case scenario, such a treatment could mitigate the worst outcomes in at-risk patients and potentially cure the disease in a majority of patients.

Many have put their hopes on remdesivir, a drug developed by Gilead (NASDAQ:GILD). And while Gilead’s initial Chicago trial showed some promising data, it was far from a cure. While patients getting remdesivir took 11 days to leave the hospital versus 15 days for the control group, and the remdesivir group showed an 8% mortality rate versus 11% in the control group, infectious-disease expert Anthony Fauci said that, while promising, the data “has not reached statistical significance but the data needs to be further analyzed.”

However, investors should know that remdesivir isn’t the only game in town. One of the more promising alternatives could be synthetic antibodies derived from recovered patients. Antibodies are proteins created by the body’s immune system to fend off threats, such as the coronavirus. In recent days, China reported a breakthrough on such an antibody treatment, but that data was only proven in a test tube, not humans.

However, researchers in Israel just made a new breakthrough on the antibody front that could be even more promising. 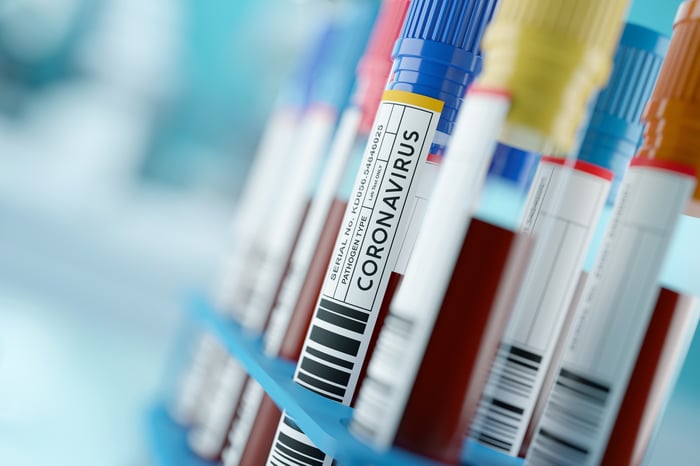 According to the Israel Defense Ministry, which made the statement on behalf of the Israel Institute for Biological Research, the IIBR has made a “breakthrough” in its own antibody treatment.

There are a few ways in which the Israeli breakthrough is unique relative to earlier antibody trials. First, it is a monoclonal antibody, meaning it was derived from a single recovered cell. Other antibody treatments have been polyclonal, or derived from two or more cells from different origins. According to The New York Times, this makes the Israeli antibody potentially more potent. Apparently, the antibody also contains an “exceptionally low proportion of harmful proteins,” according to the Jerusalem Post. Most importantly, the institute has demonstrated the antibody’s ability to neutralize the coronavirus “inside carriers’ bodies,” not just a test tube. However, it appears that the antibody has not yet been trialed in humans, according to The Guardian, so it’s unclear on what basis the IIBR is making this claim.

The IIBR is now working on securing a patent, before looking to test the antibody further and collaborate with international manufacturers to mass-produce the antibodies. That process could take longer, though obviously the Israeli authorities will be looking to speed that process up, with the defense ministry saying:

This is an important milestone, which will be followed by a series of complex tests and a process of regulatory approvals. … This being said, the scientists at the institute believe that the nature of this breakthrough could lead to a shortening of the process, which could span over several months.

Israel, like most other countries and leading pharmaceutical companies, is also working on a vaccine, which will ultimately need to be developed before the world economy can go back to how things were before. Nevertheless, if an effective treatment can neutralize the disease in a majority of patients and therefore mostly prevent worst-case outcomes, people may become less afraid of going out in public. That could mean more travel and leisure activities can commence to a greater extent than they are now.

Still, investors shouldn’t get ahead of themselves by thinking this treatment is a panacea. After all, doctors still don’t know if the antibodies will be widely effective in large numbers of humans with COVID-19. Even if they are, it will be several months before the antibody drug may be available. In addition, it’s unclear whether people can become reinfected with coronavirus, even once they have antibodies. For instance, people need to get flu shots every year to ward off the seasonal flu, so it’s possible the same may be true of COVID-19.

Still, this breakthrough is another promising sign that doctors are developing a better toolbox by the day against coronavirus. Investors should keep a close eye on the development of these antibody drugs. From the looks of it, they may become even more consequential to treating coronavirus than remdesivir, and could therefore offer a key to opening up more of the economy this summer and fall.

0 comments on “Israel Reports a “Breakthrough” Coronavirus Antibody Treatment Could this be a cure, or something close to it?”