Joshua: I’ll go down as this generation’s great 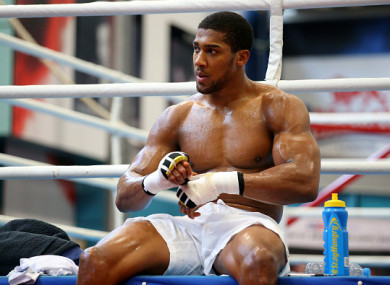 Nearly a year later, Anthony Joshua still won’t try to rationalize what Andy Ruiz Jr. did to him in their first fight.

The British superstar simply attributed his poor performance to Ruiz being the better man in that unforgettable upset at Madison Square Garden in New York.

England’s Joshua was more than a 20-1 favorite over Ruiz, but a resilient Ruiz got up from a third-round knockdown, dropped Joshua twice apiece in the third and seventh rounds and produced one of the most stunning results in boxing history.

The 30-year-old Joshua bluntly recalled what happened to him in his U.S. debut last June 1 during a recent interview with IFL TV for its YouTube channel.

“I got beat,” Joshua said. “I was shook. Everything that you saw in that fight was what I was going through. It’s tough. It’s a hard game. I got beaten to a pulp and I had to kind of pull myself back together. And that’s just how it went. And now they’re going to see the rebirth of me because, you know, everyone writes me off in this boxing division. You know, everyone wants to write me off. But I believe that I will go down as, you know, this generation’s great.’

0 comments on “Joshua: I’ll go down as this generation’s great”