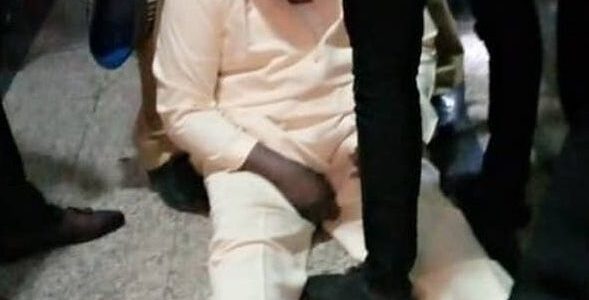 There was drama at the Federal High Court, Abuja on Thursday as former Chairman, Pensions Reform Task Team (PRTT), Abdulrasheed Maina, who is being tried for N2 billion money laundering, collapsed in court.

He collapsed in similar fashion to former National Publicity Secretary of the Peoples Democratic Party (PDP), Chief Olisa Metuh, who was sentenced to prison by the same court.

The drama began when Anayo Adibe, counsel to Maina,  told the presiding judge, Justice Okon Abang that he would be unable to continue with his client’s no-case submission motion today, because he was yet to receive the record of proceedings of the court since Maina’s arraignment.

But Justice Abang told Adibe that it was his duty to get the record of proceedings, which had already been processed, from the registry rather than waiting for the registrar to look for him.

However, as the registrar was reading out the proceedings that were ready for collection, Maina, who was sitting beside the dock, slumped, causing confusion in the courtroom.

The defendant was hurriedly rushed out of the courtroom by Nigerian Correctional Centre officers, as Justice Abang suspended the proceedings.

The former pensions reform chairman was still being attended to by court assigned medical officers as at the time of filing this report,

Maina had, through his counsel, told the court on Wednesday that he had no case to answer in the allegations levied against him by the Economic and Financial Crimes Commission (EFCC).

He had earlier told Justice Abang, shortly after counsel to the EFCC, Farouk Abdullah, had closed the commission’s case, that he would be filing a no-case submission.

His counsel told the court that he would be filing the no-case application in accordance with Sections 302 and 303 of the Administration of Criminal Justice Act (ACJA) 2015, arguing that the evidence tendered by the prosecution was insufficient to justify the trial of his client.

Recall that Maina was first arraigned before Justice Abang on 25 October, 2019, by the EFCC, alongside his firm, Common Input Property and Investment Ltd, on a 12-count charge bordering on money laundering to the tune of N2 billion, allegations that he denied.

On November 18, Justice Abang ordered Maina’s arrest following his refusal to appear in court since September 29 when his case resumed.

Sen. Ali Ndume (APC – Borno South), who stood surety for the defendant, was remanded in prison custody on November 23, for failure to produce him in court, but was granted bail five days after, on grounds of his good conduct.

Maina was, however, produced in court on December 4, by security operatives after he was arrested in neighbouring Niger Republic and extradited to Nigeria.

0 comments on “Maina Slumps In Court”