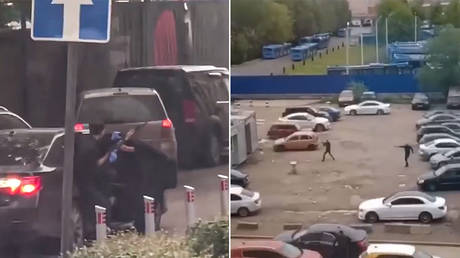 Deafening volleys of gunfire startled residents of a sleepy residential area in south Moscow, on Sunday. They witnessed video-game-like scenes of men firing AK-47s and other guns in broad daylight below their windows.

Police have yet to comment on what prompted the violence, but several sources speculate that it was related to a conflict within the lucrative funeral business in the Russian capital.

Witnesses told reporters that it initially looked like a road rage incident. One car refused to let another pass on the narrow road, with the drivers and passengers getting out and starting to argue. The row then moved to the parking lot, where it escalated and shots were fired.

However, it’s unclear how the two vehicles turned out to be occupied by armed men. Carrying firearms is illegal in Russia and isn’t common.

Witnesses gasped (but kept filming) as the gunmen ran around the residential area shooting handguns and what seemed like AK-47s.

The police later clarified that it were Saiga hunting rifles, which are made by Kalashnikov and based on its legendary assault rifle.

“We heard numerous shots,” a woman who’d witnessed the gunfight from her window, told news outlet Life, saying she thought at first that someone was setting off firecrackers.

“It was very scary,” she said, also describing how mothers in the yard grabbed their kids and rushed to safety when the shootout started.