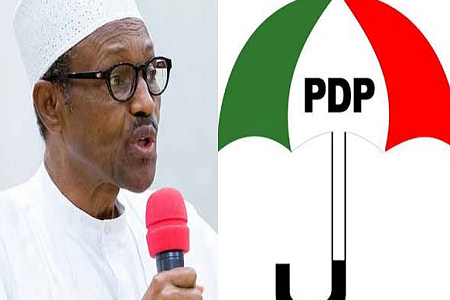 • COVID-19 will not serve as alibi, PDP tells Buhari

According to the Party, the President should note that the level of despondency he has bequeathed the nation in the last five years of his administration was characterised by abuse of power.

The PDP said that “President Buhari should rather apologise for the tragic failures of his administration for wrecking our once robust and cohesive nation, imposing hardship and creating acute despondency across the country in the last five years.”

The opposition People’s Democratic Party, through its National Publicity Secretary, Kola Ologbondiyan, said President Buhari should address the bloodletting and intimidation his administration has been indicted for.

“The PDP stresses that President Buhari should also address the manifest manipulations, bloodletting, intimidation, coercion, abuse of power and human right violations that characterised the 2019 Presidential elections as such is the only way to achieve a healing in our national polity.

“Our party further advises President Buhari against living in denial of the ugly fact that his administration and his dysfunctional All Progressives Congress (APC) had deserted, betrayed and abandoned underprivileged Nigerians, particularly our youth, after the APC deceived them with false promises to grab power in 2015.

“The PDP further urges Mr President not to allow his handlers to push him into sugarcoating the colossal failures of the last one year, which had been characterised by humongous corruption, worsened insecurity and economic hardship, while the President, who had promised to lead from the front, recedes deeper into the luxury and safety of Aso Presidential villa.

“Our party calls on President Buhari not to give room for presidential advisers to further ridicule his office by making him read another windy speech that would be laced with vacuous promises, doctored performance claims and myriads of incorrect and unsupported statistics that would end up being at total variance with the harsh realities on ground.

“Mr President should know that he cannot use the COVID-19 pandemic as excuse for failure as his administration had since lost grip of the security and economic situation in our country even before the outbreak of the scourge.

“Nigerians hope that President Buhari would always recall that the PDP handed over a robust economy which was rated as one of the fastest-growing in the world, only for him to bring our nation to its knees as the world’s poverty capital and a debtor country within a space of five years.

“President Buhari should use the occasion to reflect that his administration had ruined our productive sector with harsh policies leading to closure of businesses, dearth in foreign and domestic investments and acute unemployment, with over 40 million job losses.

“Mr President should contemplate on the alarm raised by the Minister of Labour and Productivity, Dr Chris Ngige, that unemployment rate under this administration will hit a devastating 33.5 per cent this year.

“Mr President should also reflect that under his watch, our naira which was valued at N160 to a dollar under the PDP, fell to N500 and then to the current N390; that his administration increased the price of fuel from where the PDP left it at N87 per litre to N145 and only reduced it to N125 after much pressure from our party; that his government increased the Value Added Tax (VAT) from 5% to 7.5%, despite the attendant spike in costs of food and essential services.

“We urge Mr President to pause and ponder over the fact that whereas the PDP administration paid off foreign debts and grew our economy; his administration has continued to accumulate debts and depleting our foreign financial instruments with reckless abandon.

“It is appalling that in the last five years, the Buhari Presidency cannot point to any landmark development project it initiated and completed in any part of the country.

“Instead, what we get is a chaotic federal executive that resorts to recycling of imaginary achievements and attempting to appropriate PDP’s projects in critical sectors of our economy.

“The PDP, therefore, urges President Buhari to align with the expectations of Nigerians by apologising for his failures and getting more competent hands to manage the affairs of our nation in the remaining three years of his administration,” Ologbodinyan said in the statement.