The ‘mysterious’ Chinese doctors and a professor’s response 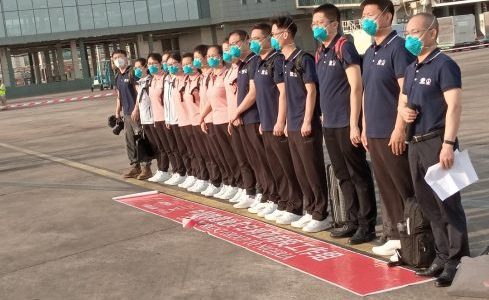 Everything about it was shrouded in secrecy and seeming insincerity. At other times, it was grand equivocation, as events began to unravel. It is the story of the celebrated arrival of the Chinese medics last April in Nigeria. The authorities spoke from different sides of their mouth on who they came for and what they actually were. Initially, we were told they were all top-notch medics coming to help the country deal a decisive blow to the emergent pandemic and share hands-on experience with Nigeria’s frontline medics. The Secretary to the Federal Government and Chairman of the Presidential Task Force on COVID-19, Boss Mustapha, during a briefing by the PTF on April 6 said the doctors would not be involved in “case management and interface with patients”, except to “train our manpower, advise on procedures and methods as well as install and test the equipment donated before handing them over.” For effect, he hinted that every country needed all the help it could get at this point, adding that even the “almighty United States of America” was seeking external help.

The Minister of Health, Ehanire Osagie, promised they would be required to quarantine for 14 days on arrival during which time they would hold teleconferences with Nigerian health professionals to compare notes. All these were aimed at giving the raging monster of a pandemic a hot chase and fightback. So, they told us then.

A Nigerian aircraft was sent to bring the “medical saviours” peacefully with an elaborate tarmac reception quickly organised for them at the airport on arrival where they were charitably garlanded with goodwill messages. A grateful government had representations handy at the airport. The cover pages of almost all the national newspapers bore the photographs of the ecstatic 15-member Oriental guests, colourfully and smartly attired. In fact, they looked every inch like rock stars on a world tour. As my Facebook friend, Maazi Ogbonnaya, would say, for awhile, as they paused, the nation paused and everything paused for them. The expectation in the air was palpable. And understandable too.

Strangely, the News Producer of China Global Television Network, Shen Shiwei, tweeted in his verified Twitter handle, @shen_shiwei, that the Chinese “technical team” was sent to Nigeria by the  China Railway Construction Corporation for “purely advisory and technical work to help install equipment,” “provide health assistance to Chinese and Nigerian employees of the company” with “no treatment responsibility.”

This was corroborated by the Executive Director of CCECC, Jacques Liao, who said, “The primary purpose of the team is to provide CCECC employees with critical and necessary healthcare.”

The company said it invited the medical team ostensibly to look after their staff and Nigerians as part of its CSR to the country.

Nigerian doctors raged, lawyers yelled while everybody complained why Chinese should be invited when the extant law doesn’t allow uncertified foreigners to practise in Nigeria. The country’s umbrella body for doctors, the Nigerian Medical Association, said, “We are … profoundly dismayed to learn that the Federal Government is … inviting the Chinese who from available accounts are not out of the woods themselves. The spike in cases and the death toll from COVID-19 in Italy coincided with the arrival of the Chinese in the guise of offering assistance. Even the United Nations has only just recently commended the efforts of Nigeria so far,” The NMA insisted the medical voyage was “ill-timed and of no overbearing significance considering that whatever experiences the Chinese have can be shared by digital technology through conferencing,”

The body’s opposition was premised on the grounds that the government, in arriving at the decision, did not take into consideration the extant laws regulating the practice of medicine in Nigeria as enshrined in the Medical and Dental Council Act. Incidentally, as of April 9, when the Chinese arrived, Nigeria had 276 confirmed cases of COVID-19 with six deaths. By Wednesday, the number had shot up to 8,344, with 249 deaths, while Lagos, the country’s epicentre, had 3,756 cases leading many to ask where then is the Chinese magic?

Besides, some questioned the emergency that warranted the “rush” to accept the Chinese offer of help. While we had our say, however, government had its way, claiming it’s at no cost to us.

Then, fast forward to May. The minister of health was asked at the daily PTF briefing the whereabouts of the Chinese medics and what they had been doing in the country since their arrival. A bemused citizenry listened as the minister said he knew nothing about them and that actually not all of them were medics, after all they did not come for the country. Really? Cross-check this latest response with what he said earlier on this same matter. So, an aircraft was dispatched, drums rolled out and the red carpet unfurled at the airport so a gang of sightseers can jolly come and moonlight in our shores in the pretext of offering a much-needed helping hand?

Maybe our leaders thought we are  too overwhelmed by the noisome pestilence that we barely took note of what those in the forefront of managing the pandemic response architecture say or do not say. That is how nobody has intelligibly explained how the high expectations government officials made the citizens to have over the arrival of the Chinese on the country’s fight against COVID-19 turned into a mirage.

Meanwhile, in another, though related, matter, I watched in horror, like many other Nigerians, on national TV on Tuesday, as a Nigerian professor, asked to oversee his state’s response to the COVID-19 pandemic, announced that 25 samples of the 96 journeymen from the North intercepted by the police in his state on their way to a neighbouring state tested positive for the virus. As he spoke, he was grinning from ear to ear. No thought of seeing them as suspected cases that should be isolated until their results came out crossed their mind. That’s, the professor’s mind. That is called being up to the assigned task. It goes without saying that a professor should not be caught on the wrong side of this noble virtue. More so, at a time of a global pandemic in a country with a challenged health system.

Instead, all  this reputable professor did was to tell us, unperturbed by this disturbing discovery, that he collected the samples of the unknown travellers, with no known address, and bade them farewell as they gleefully jumped into their trailers to only God knows where. At a time of a ban on interstate movement by the federal and state governments. What an unprofessorial error of judgement or oversight. He might as well have embraced them warmly, one by one, as a medical “odogwu” he is, to show them love, as the holy book asks we do to strangers.

Now that it has turned out that those felons have tested positive for coronavirus and pose great risk to public health and safety, how will my professor locate them to quarantine them for treatment? And perhaps cure them with that his much-talked-about herbal mixture. After all, what he is looking for in Sokoto has suddenly landed inside his deep “sokoto”. Sadly, my professor doesn’t have their contact addresses, so, chances of contact tracing are zero. The implications are too grim to contemplate for the people and the nation at large, simply because of some people’s lack of discretion and due diligence to tasks. That is how we roll here.

I don’t even want to recall that this same professor conducted arguably the most atrocious elections in the history of sub-Saharan Africa some years ago. But that is just a story for another day. Tufiakwa!