Miner hits big with rare gem selling for US $2 million 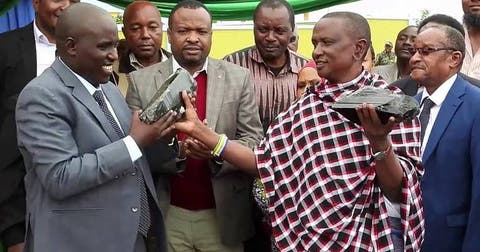 A Tanzanian miner who previously made the news after discovering two large Tanzanite stones has sold a third one for the equivalent of 2 million US dollars. Saniniu Laizer’s latest find weighed over 6 kilogrammes.

Tanzanite, the blue and violet variety of the mineral zoisite, has only ever been found in northern Tanzania.

Mr Laizer is keen to use the proceeds from his discoveries to help local people:

With the money we are getting, we will give back to our community. I personally have set up two schools for children with the money I received from mining.”

Small-scale miners like Mr Laizer operate under licences acquired from the government, but illegal mining of the mineral is an issue, especially close to major mining operations.

Mr Laizer says he will not change his lifestyle, but that he does intend to slaughter one of the cows from his herd of 2,000 to celebrate.

Tanzanite is one of the world’s rarest precious stones and was first discovered as recently as 1967.

The gemstone is used in necklaces, bracelets, earrings and ornaments.