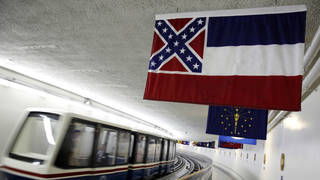 Follow RT onThe Mississippi state flag was pulled down from the State Capitol building shortly after lawmakers voted overwhelmingly to remove the Confederate battle emblem from the flag amid a reinvigorated anti-racism push.

“Today, the future has taken root in the present. Today, we and the rest of the nation can look on our state with new eyes, with pride and hope,” Speaker of the House Philip Gunn told Mississippi Today after both houses of the state legislature approved the measure.

The controversial flag was almost immediately removed from the State Capitol, as the Republican governor, Tate Reeves, previously confirmed that he would sign the bill, saying it was “time to end” the arguments and division over the 1894 symbol.

Mississippi was the last state whose flag featured a Confederate emblem, and until recently hesitated to change it without wider public support. In the last referendum on the state flag in 2001, nearly two-thirds of voters decided to keep it as is.

However, facing growing pressure to address racial injustice amid nationwide Black Lives Matter protests, the state legislature fast-tracked the bill and will now assemble a panel to design a new flag.