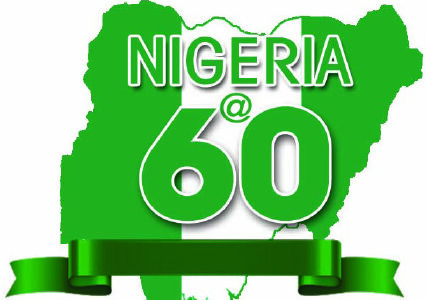 Elderstatesmen and eminent Nigerians have taken a long look at the country in the last 60 years and agreed  that the nation has miss-stepped. They warned that unless a drastic  measure is taken the country might be heading for precipice .

Nigeria today marks  60 years of political Independence . The celebration, according to the government would be low-key and will  last for a year.

However, they submzitted that poor leadership and bland politics have been the bane of  development of Nigeria. The elderstatemen cautioned that Nigeria was fast sliding into extinction  unless bold steps were taken to correct anomalies stunting the growth  of the country. These are their verdicts:

First republic minister of Aviation, Chief Mbazulike Amaechi said he was  disappointed  and unhappy at the condition  of the country.   He said  Nigeria since independence appeared  to be developing backwards in spite of the abundant  natural wealth of the country.

However, he  said all hope was not lost as according to him, 60 years is a small period in the life of a nation.

“The Nationalists who fought for independence were given mandate to rule the country according to the constitution they drafted. We merely ruled the country for six years and the military took over the country and ran the country for 38 years, introducing massive corruption and leaking of the territory of the country.

“The military rendered this country useless for 38 years and at the end of 38 years, they are not even gone, they are coming back through the back door to continue what they did not complete before, so that is the problem of the country.

“The way out is first of all, get a constitution that will make people quiet. The constitution of Nigeria must be reviewed and then the country must be led by somebody who has a programme, an honest man. While we continue to pursue the corrupt ones of the past, let us continue from there now and constitute a new one led by honesty, justice and equity. We can never say we are wasting all our time pursuing financial crimes of the past, no. Let that be pursued in its own way but let a new leadership appear in this country, a leadership that will inspire confidence, confidence of all parts of the country.”

I feel sad and dejected –Adebanjo

Elder statesman and Afenifere leader, Ayo Adebanjo, said he felt sad and dejected over the state of affairs in the country.

He expressed regrets at  the failure of successive leadership in Nigeria, saying that they have all truncated the dreams of the founding fathers of the nation.

He said: “Anybody who likes Nigeria should persuade President Muhammadu Buhari to restructure the country now. That is the only thing that will save the country.”

I don’t want to talk about Nigeria again – Olunloyo

Former governor of the Old Oyo State and elder statesman, Dr. Victor Omololu Olunloyo expressed frustration over the state of affairs. Olunloyo, who turned 85 years on April 14, 2020,  told our reporter that he does not want to comment about Nigeria again, saying he and other people have said many things in the past.

Olunloyo, however, made a reference to a former president of Nigeria, Chief Olusegun Obasanjo, who has been talking about the country through many letters he had written to the former and the serving presidents. He continued: “The people that have been talking about Nigeria, like Obasanjo, what have they got in response? Tell me, what have they got?

“This is a country, where a serving Attorney General of the Federation, Chief Bola Ige, was killed. He was killed on 23rd of December 2001. Has the government found the killers? No. Those that killed Bola Ige are still alive, and they are enjoying life. The deputy governor during Bola Ige’s regime, Sunday Afolabi, was poisoned, irrespective of the circumstances that surrounded it, he died.”

Former labour leader, Frank Kokori expressed misgivings about the country’s future, saying, “Though Nigerians are thankful to God for still surviving as a country, the omen for the future is not bright.”

He lamented that since independence, “the country has been mismanaged by various leaderships, a development that has left the masses at the receiving end as they have never really enjoyed what they are supposed to enjoy.”

He attributed the country’s sorry state to leadership deficit. He said: “Like I have always said, we were in the same level with the Asian Tigers like South Korea, China, India, and Malaysia in the 60s but today, they have all overtaken us. Countries like Vietnam and co were way down below us but today, they have all overtaken us because the black man has refused to learn from history.

“Anytime I tune my television and see Nigerian youths crossing the desert amidst all the hardships, going to Europe where they are treated as third class citizens, I weep. The reason is because African leaders are selfish. The instinct of acquiring material things and lining up their pocket is a disgrace to the black race”, he said.

Kokori called on the people in power to have conscience and think about the suffering masses, even as he advised Nigerians not to run away from the country but to stay and salvage it together.

Second Republic politician, Alhaji Tanko Yakasai blamed the military for truncating the pace of development that was ushered in by the country’s Independence in 1960.

He maintained that the country, both at regional and central levels,  was on the path of a steady progress within the first six years of her Independence, but added that things dramatically took a nose-dive following the military coup of 1966.

He explained further that the intervention was particularly responsible for a hike of ethnic and tribal politics in the corridors of power and a sharp decline in the surge of patriotism and nationalism that were prevalent at the eve and early days of Independence.

He also insisted that that the military intervention laid the foundation for issues of leadership and poor governance tendencies among others, all of which according to him were responsible for the poor state of affairs in the country today.

But he reasoned that despite the present gloomy outlook in the land, Nigerians still have a reason to celebrate its 60th anniversary.

Another elder statesman and former governor of Anambra State, Chief Chukwuemeka Ezeife, lamented the present situation of the country, saying that it has retrogressed looking back at the years after independence.

He recalled that there was a time when some parts of the country were growing faster than the rest of the world, saying that both the military which led the country at certain times and bad leadership of the democratically elected administrations contributed to Nigeria’s problems.