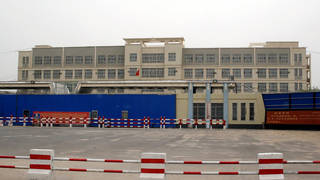 Beijing has come out swinging after US President Donald Trump signed a law paving the way for sanctions against Chinese officials for the alleged oppression of Uighur Muslims, accusing the US of a “malicious attack.”

In a statement on Thursday, the Chinese Foreign Ministry accused the Trump administration of an attempt to smear China with a new bill that alleges rampant human rights abuses by the Chinese government of ethnic Uighur minorities in the predominantly-Muslim Xinjiang Province.

Previously passing Congress with flying colors, Trump signed the bill on Wednesday. In an accompanying statement, he accused Beijing of “systematic use of indoctrination camps, forced labor, and intrusive surveillance” to encroach on the rights of Uighurs and “other minorities.”

Firing back, the ministry advised that the US “immediately corrects its mistakes” and “stops using …the Xinjiang-related bill to harm China’s interests and interfere in China’s internal affairs.”

Unless Washington is willing to make amends and change its rhetoric on the issue, it should brace itself for potential repercussions, the ministry said.

China will definitely resolutely resist, and all consequences arising therefrom will be fully borne by the US.

Beijing has repeatedly brushed off allegations that it operates “concentration camps” in the area, instead maintaining that the facilities where some of Xinjiang’s Uighurs are interned are “vocational centers”needed to provide job and language training, as well as uproot “extremist elements.” As a proof that the controversial endeavour has been a success, the ministry said that Xinjiang has seen no major unrest in three years.

The ministry also accused the US of applying “double standards” when it comes to China and its efforts to eradicate “terrorism.”