On the Nigeria-Ghana diplomatic row 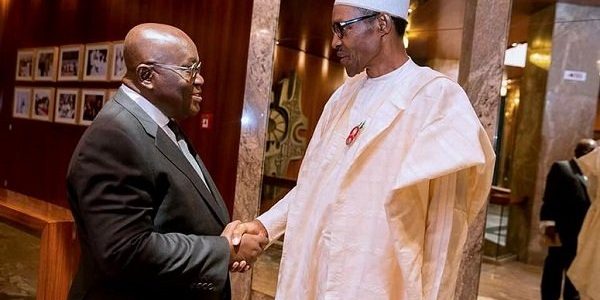 Not a little anger has been generated and duly expressed by Nigerians over the viral video of the demolition of portions of Nigeria’s diplomatic buildings that are still under construction in Accra, Ghana, by people who claimed that the land on which the diplomatic compound is being built rightfully belongs to them and that Nigeria is a trespasser.

And this outpouring of anger and indignation at what Nigerians generally regard as a slap on our national integrity is not totally unjustified, especially against the backdrop of the poor treatments being meted to Nigerian nationals in several smaller African countries, many of which are beneficiaries of Nigeria’s sacrifices in the past.

On the Nigeria-Ghana diplomatic row

Not a little anger has been generated and duly expressed by Nigerians over the viral video of the demolition of portions of Nigeria’s diplomatic buildings that are still under construction in Accra, Ghana, by people who claimed that the land on which the diplomatic compound is being built rightfully belongs to them and that Nigeria is a trespasser.

And this outpouring of anger and indignation at what Nigerians generally regard as a slap on our national integrity is not totally unjustified, especially against the backdrop of the poor treatments being meted to Nigerian nationals in several smaller African countries, many of which are beneficiaries of Nigeria’s sacrifices in the past.

Even this newspaper had to publish a powerful editorial expressing clear indignation at the demolition incident and the generally unfriendly treatment of Nigerians resident and doing business in that country, noting especially that “for some years now, Ghana has been harassing Nigerian residents and businesses with some draconian laws and policies, leading to constant protests by the Nigerian community in Ghana.”

Other commentators even called for a discontinuation of the Afrocentric principle that has underpinned Nigeria’s external relations since 1960.

Those who commented and took umbrage at the ugly turn of events seem to labour under the false assumption that a high-level of cordiality, brotherliness and friendship exist in relations between Nigeria and Ghana, a fact which explains their umbrage.

This assumption is, unfortunately, far from the reality, and I will explain. But let me first establish a distinction between nation-states and their nationals as a basis for our understanding of the mutual diplomatic relations between two countries.

More often than not, many public analysts and commentators on international relations and diplomacy often fall into the simple error of conflating the state and its nationals, and fail to distinguish the sovereign acts of the state from the acts of individual nationals acting on their own behalf rather than on behalf of the state. This conflation is evident in the present case.

Over the decades since their independence, Nigeria-Ghana political and diplomatic relations have been fraught with difficulties, ideological disagreements, personality differences, geopolitical conflicts, rivalries over continental leadership, etc.

Since Ghana became independent in 1957 and Nkrumah effectively began his campaigns for African political unification by the hosting of a series of Africa-wide conferences of political parties, trade unions, political leaders, culminating in the first Conference of Independent African States in Accra in 1958, relations with Nigeria have been tenuous.

First was the difference in personalities and ideological orientations of Kwame Nkrumah and Alhaji Sir Abubakar Tafawa Balewa, further compounded by accusations of Ghana’s meddling in Nigeria’s internal politics in furtherance of Nkrumah’s grand plan for African integration, an idea that Sir Abubakar derided, retorting that “Nigeria is big enough and does not need to join others…if others wish to join Nigeria, their position will be made clear to them in such a union.”

We can also recollect acts of mutual expulsions of nationals in the 1960s and the 1980s, Ghana’s serial lack of cooperation with Nigeria’s diplomatic efforts in West Africa in the 1970s, as testified to by Joe Garba in his book, Diplomatic Soldiering.

Make no mistake about it, Nigeria and Ghana have been fellow competitors for influence and supremacy in every area, from sports to politics, to sub-regional cooperation to African unity and continental integration. This is not necessarily a bad thing.

But the act of demolition in question was carried out by some apparently disgruntled private individuals acting on their own behalf, not on behalf of the Ghanaian state, although the High Commission claimed it did not receive the expected protection from the Ghana police under the Vienna Convention on Diplomatic Relations (1961).

Essentially, the demolition was not the sovereign act of the Ghanaian state, so the government of Ghana can only be blamed for shirking its obligations of protection under the Vienna Convention. There are no indications that the Ghanaian government authorized or sanctioned the act.

In this case, the Ghana authorities promptly condemned the acts, apologized to Nigeria, promised to bring the perpetrators to book; the Ghanaian president called President Buhari and assured it would rebuild the damaged premises.

All these are because Ghana as the host state bears responsibility for the protection for and inviolability of diplomatic facilities in its capital, and is thus liable to pay adequate compensations to Nigeria, unless Nigeria does not want it.

It is the practice in diplomatic relations for host nations to compensate sending states for attacks/destruction/violation of diplomatic premises in their capitals.

Nigeria itself has had to pay such compensations on at least two occasions that I can recall, once in the late 1970s and the other in 2010s.

Because Nigeria had failed to prevent the mob attack on the diplomatic premises, the High Commissioner, Sir Martin le Quesne, presented formal requests to the Federal Military Government for just compensation, although Nigeria’s angry reaction was to declare Sir Martin persona non grata for making a legitimate request during the period of official national mourning for the assassinated head of state.

The second and most recent occasion was after the Boko Haram bombing and destruction of the United Nations Nigerian headquarters compound in Abuja. It was Nigeria’s responsibility under international law and diplomatic relations to rebuild the damaged buildings.

The recent incidents in Accra are not a sufficient ground for the diplomatic tit-for-tat that some have suggested. Both countries have much deeper and strategic national interests and ties that bind them at both bilateral and multilateral levels that they cannot allow a minor storm in the tea cup to derail their relationship.

It was sufficient that the Nigerian government stoutly protested the acts and the Ghana government promptly owned up to its diplomatic responsibilities and accepted to do the needful.

Once that is done, there is no need to further rub Accra’s face in the mud, after all Nigeria itself bears part of the blame for the controversy by not fully perfecting all the necessary procedures for the ownership of the piece of land.

This short analysis does not pretend to discuss the entirety of the two nations relations but only points out why calls for retaliation over building demolition are uncalled for.

Again, it does not pretend to be unaware that Ghana has in recent years been implementing policies that essentially discriminate against Nigerians and their businesses in that country, but these are issues that can and should be mutually negotiated and resolved at the diplomatic table, not a matter for tit-for-tat.

0 comments on “On the Nigeria-Ghana diplomatic row”