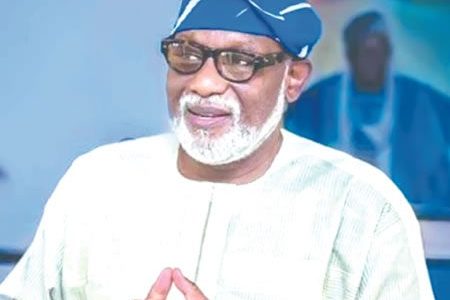 A former Secretary to the Ondo State Government (SSG) Ifedayo Abegunde who resigned last month to support the aspiration of Chief Olusegun Abraham has returned to join forces with Governor Oluwarotimi Akeredolu.

Abegunde had said that Akeredolu would not win the party primaries because his administration lacked human face.

But Chief Abraham was the first to step down for Akeredolu before the party primary.

The former SSG was said to have met with Governor Akeredolu on Sunday evening at the Government House, Akure

Pictures he took with Akeredolu’s son, Babajide and another APC’s chieftain where he displayed the four plus four sign flooded the social media.