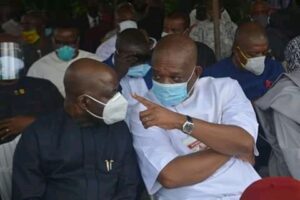 Former Managing Director/CEO of Diamond Bank and Abia governorship candidate of the All Progressives Grand Alliance (APGA) in the 2015 and 2019 elections, Dr. Alex Otti met with the Chief Whip of the Senate, Dr. Orji Uzor Kalu and former National Chairman of APGA, Chief Victor Umeh over the weekend.

The outcome of the meeting held at the Arochukwu residence of the ex-banker, was not made public, but it was believed they had discussions on the planned defection of the Otti to the All Progressives Congress (APC).

However, yesterday, Otti made public his intention to dump APGA which he helped to become a vibrant opposition party in the state for APC.

A statement by Otti’s media assistant, Ferdinand Ekeoma, confirmed that the foremost banker was set to declare for APC.

The statement read in part:  “The proposed declaration is billed to take place on Friday, August 14, at his Ward, Ehi na Uguru Ward 5, Isialangwa South L.G.A of Abia state, by 12 noon.

“The financial expert had during a recent interview announced his exit from APGA, citing factionalization and gross abuse of the foundational ideals and ethos of the party at the highest level, and subsequently registered in the APC at his ward, Ehi na Uguru Ward 5, Isialangwa South LGA of Abia State.”

Ekeoma said the leadership of the APC at the highest level has promised to storm the state for a special statewide reception for Dr. Otti and other entrants joining with him when the  COVID-19 pandemic has subsided.