Yesterday, we reported the barricade set up by youth along Ukpo-Abba road leading to the Onitsha Enugu expressway.

We have since gathered that the police have moved to take control as uneasy calm has enveloped the Abba community in Njikoka LGA, and Ukpo in Dunukofia LGA.

The Nigeria Police Force patrol on Abba-Ukpo boundaries, and environs.

It was gathered that the clash, which reportedly led to the burning of a Volkswagen golf and two motorcycles, escalated when a security man attached to one of the construction sites, allegedly fired gunshots at the advancing community people, who visited the sites to ascertain level of damages and encroachment, especially on the premises of Community Secondary School, Abba.
Abba, on one side, Ukpo and Ukwulu, on the other side, have been engaged in a protracted land dispute that resulted in the demolition and erection of structures on private and public properties in the area. 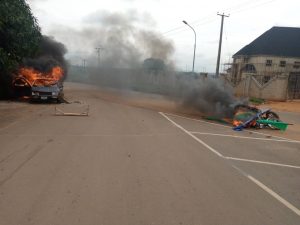 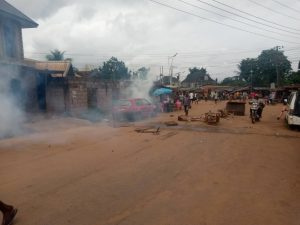 He explained that he will lead a team of Policemen that will effect the 24-hours patrol on Abba-Ukpo boundaries, in company of men of the vigilant group.