Russia calls upon OPCW to release data on Navalny ‘poisoning’ to all member states; says Germany failing to provide answers 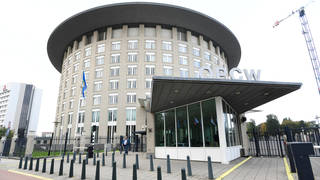 Russia calls upon OPCW to release data on Navalny ‘poisoning’ to all member states; says Germany failing to provide answers

Follow RT onRussia’s mission to the Organisation for the Prohibition of Chemical Weapons (OPCW) has asked Germany to make public all the data, at its disposal, related to the alleged poisoning of Russian opposition figure Alexey Navalny.

After Berlin refused to share information related to the Navalny affair with Moscow, sending it to the OPCW instead, Russian representatives reached out to Germany through the organization, Aleksandr Shulgin, envoy to the chemical weapons watchdog, told RT.

“We’ve sent a letter to the permanent representation of Germany,” Shulgin explained.

We requested the Germans to provide us with exhaustive information about results of analyses, blood samples, biological samples, in one word – all the materials in relation with this.

Apart from that, Russia’s mission to the OPCW also contacted the leadership of the international organization, asking it to release all Navalny-related information it has to the member states, effectively making it public.

“I’ve forwarded my personal letter to the Director General of the OPCW, Fernando Arias, briefing him about our note to the Germans and asking him to make this available for all member states of the chemical weapons organization,” Shulgin said.

So far, Moscow has not received any information from German officials despite repeated requests from various government agencies. The only result of this lack of communication is the disruption of Russia’s own domestic probe into what happened to Navalny, according to Shulgin. This has delayed the pre-investigation process by Russia’s prosecutor general, which is necessary in order to determine whether the incident requires a full-fledged criminal inquiry or not.

0 comments on “Russia calls upon OPCW to release data on Navalny ‘poisoning’ to all member states; says Germany failing to provide answers”