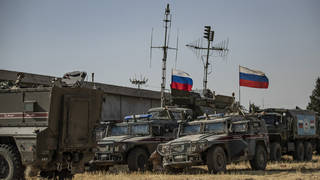 A senior Russian military adviser with the rank of major general has been killed in an attack in Syria’s eastern Deir ez-Zor province, the Defense Ministry has confirmed. Two more Russian servicemen were injured in the incident.

A Russian military column was struck by a blast on Tuesday while en route from the Deir ez-Zor area, where the military had carried out humanitarian operations. A roadside improvised explosive device was detonated near the convoy, severely injuring a major general.

The high-ranking officer was rushed to a hospital but succumbed to his injuries, the Russian military confirmed, without providing any further details about his identity. Two more servicemen were injured in the explosion, the ministry added, without naming their ranks.

No group has so far taken responsibility for the attack. The incident took place just a day after a joint Turkish-Russian convoy was targeted in another similar attack in Syria’s Idlib province. A Turkish military vehicle was hit by an explosive device at that time, but the attack resulted in no casualties.