Russian media apparently sees Biden as a shrewd statesman, not a bumbling dotard, after Putin meeting 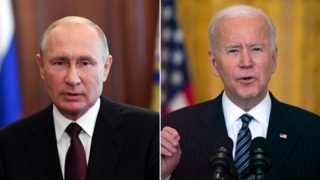 We probably won’t know for a while whether President Biden’s sit-down with Russian President Vladimir Putin in Geneva this week produced any tangible benefits for the U.S. But Biden did accomplish one thing, at least: Russia’s pro-Kremlin media no longer views him as a dotard.

For months, Russian state media ridiculed Biden “as bumbling, confused, and well past his prime,” The New York Times reports. “But by Thursday, the mood had shifted: Here was a man in the White House, some said, who understands us, whom we can do business with.” And leading the change in narrative was Putin himself.

“I want to say that the image of President Biden that our and even the American press paints has nothing to do with reality,” Putin told university graduates in Moscow on Thursday. “He’s a professional, and you have to be very careful in working with him to make sure you don’t miss anything. He doesn’t miss anything, I can assure you.”

Biden’s main tricks for turning around his image in Russia were, apparently, flattery and evident competence. Biden’s description of Putin as a “worthy adversary” caught Moscow’s attention, as did his description of the U.S. and Russia as “two great powers.” America’s “earlier doctrine, put forward by President Obama, which dismissed Russia as just a regional power, has been rejected,” said Nezavisimaya Gazeta editor Konstantin Remchukov said on state-run Channel One.

And if Biden was more respectful of Russia’s place in the world than Obama, he was also seen more a more predictable, professional, and effective head of government than former President Donald Trump. “The leaders’ meeting fully justified the most optimistic expectations and delivered the most results of any in the last decades of the relationship between the powers,” commentator Timofey Bordachev wrote in Vzglyad, a pro-Putin outlet. “Biden, believe it or not, looks to be the first American president in 30 years who is playing a ‘long game.'”

Biden “is the first post-Cold-War U.S. president who has adequate notions of what Russia is and what it wants, and what the United States can and cannot do about it,” Kadri Liik, a Russia specialist at Berlin’s European Council on Foreign Relations, told the Times. “Biden has been positioning himself very skillfully.”

Putin, it should be noted, still isn’t very popular in the U.S. — although according to one new poll, he’s more popular than Biden among Trump voters.

0 comments on “Russian media apparently sees Biden as a shrewd statesman, not a bumbling dotard, after Putin meeting”