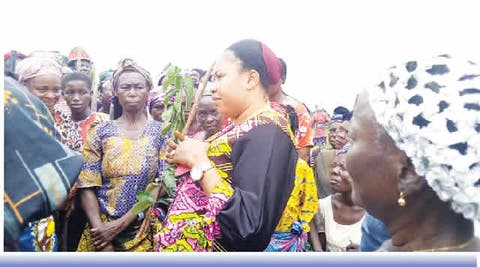 EDWARD NNACHI writes that the unending crisis between herdsmen, whose animals destroy produce, and farmers in Ebonyi State poses serious threat to food security in the state and its environs

Forty-nine-year-old Ibiam Uchenna-Ogbuewu, a native of Ebunwana Edda community in the Afikpo South Local Government Area of Ebonyi State, alternates between conveying passengers on his commercial motorcycle and his rice farm in order to make ends meet.

Uchenna-Ogbuewu has three hectares of rice farm in Oso Edda community. And with the proceeds from the farm, he operated a hitherto popular pub in Amasiri taking care of his wife, five children and aged mother.

Before now, the children’s school fees were paid with ease and other family financial obligations met easily. But currently, Uchenna-Ogbuewu’s situation has changed for the worse. Today, the farmer’s health is challenged, bills are piling up and the flame of his once popular pub is ebbing out.

He narrates, “It all started around November 2019 as I was preparing to harvest rice from my farm in the Oso Edda community, when I noticed that Fulani herdsmen had destroyed about two out of the three hectares the night before.

“On getting to the farm that morning, I discovered that herdsmen had entered the farm the previous night and their cows had trampled on the ripened rice. For some minutes, I wept and asked them why they did this kind of thing, because they were still on the farm and were very relaxed. One of them said I better shut up my mouth or they would beat me up. As I was talking to the other, another one was already bringing out his dagger to attack me.

“I went back to the village and called a photographer, who came and took photographs of the scene. Later, I told the women, who came to harvest the rice, to go back home, because there was nothing to harvest again.

“I went to Afikpo and complained to a known Fulani leader, who promised that they would compensate me, but till date, that compensation has not come. That was the beginning of my problem. I invested about N1m, which I borrowed from a microfinance bank, in the farm and I have not been able to pay back the loan or the interest. I can’t fund my pub anymore and I equally can’t take care of my family and my health is now in a bad state because of high blood pressure.”

Uchenna-Ogbuewu, who said he had suffered so much psychological and financial pains in the hands of the Fulani herdsmen, called on the government at all levels to intervene.

According to him, if nothing is done to arrest the situation, acute hunger and starvation may hit the land.

The story of a 54-year-old farmer and native of Enohia Itim community in the Afikpo North LGA of the state, who spoke to The PUNCH on condition of anonymity, is not different.

She said farming, which used to be fun for the natives, had become uninteresting among the people, noting, “You are not sure if what you are spending time, energy and resources to plant will survive destruction by herdsmen and their cattle.

“We are really suffering in this land with regard to what these cattle herders do here. They destroy our crops; they threaten our people and most times, rape our women. It is this bad and there is a need for this to stop and I call on the government to do something about it. Our farms and produce are being destroyed.”

The lamentation of farmers in the area is similar to what obtains in some parts of the state, while in others, the story is even worse.

In 2018, it was gathered that herdsmen from Mpu in Enugu State invaded farmlands in Akaeze community, Ivo Local Government Area of Ebonyi State, and destroyed crops, which angered one of the farmers, who was butchered when he confronted them.

The incident had forced Governor David Umahi to ban grazing in the entire Ivo LGA until investigation into the matter was concluded. Umahi summoned an emergency security meeting with security chiefs in the state, leaders of the herdsmen, local government chairmen and stakeholders in the local government and set up a 10-man committee to investigate the attacks.

In December 2019, a suspected herdsman, Laulo Isa, 20, allegedly raped a 54-year-old woman, Mrs Mary Okereke, to death. The suspect said alcohol and anger pushed him into committing the crime.

The incident happened in Ugwulangwu community,  Ohaozara Local Government Area of the state on December 28, 2019, while the victim was on her way home from the farm.

With the aftermath of the COVID-19 pandemic biting hard on the populace, observers say the negative activities of herdsmen are threatening food security and may hinder the food and agricultural policies of the Federal Government.

Just last week, women from four communities of Nkpoghoro, Ugwuegu, Ohaisu and Enohia Itim, in the Afikpo North Local Government Area of Ebonyi State, marched through the streets of Afikpo to protest the destruction of their farm produce by herdsmen.

According to their spokesperson, Ogwu Idume, their rice and cassava farmlands, including streams that serve as source of drinking water in the communities, have been destroyed and polluted.

Also speaking on the matter, a community leader and traditionalist, Francis Ogbonnaya, said herders’ uncontrolled activities in the land were unbecoming, adding that food scarcity was imminent if the government did not rise up to the occasion.

Omuzue Ogbonnaya, a native of Amasiri community in the Afikpo LGA, observed, “The practice of nomadism has always been there for a long time and those nomads do that to survive. I am not against that. What I am against is the herdsmen destroying farmlands and the produce of our people with their cattle. That is what I am against and every other community leader should feel bad about it.

“This ugly trend should worry our leaders, because we don’t have other sources of livelihood other than farming; a good number of us had our school fees paid many years back through produce from the farms. So, it is very disheartening to always find that our people weep over the destruction of their farm produce by Fulani herdsmen and nothing is being done about that.

“It is very bad. This is definitely going to lead to food scarcity if the government doesn’t do something about it. People are suffering and you can see what COVID-19 has done to us.”

According to the Youth Chairman of Afikpo North LGA, Oko Emmanuel, the situation has gone very bad, and he called on the government to expedite action to arrest the ugly trend.

The youth leader said, “It’s a national issue that has assumed a disturbing dimension. I am not a farmer, but my mentor is and I know the level of havoc the herdsmen’s cattle are wreaking on people’s farms. This is what led to the protest embarked upon by the Afikpo women last week.

“Thank God for the kind of chairman we have now in the council. I am talking about Mrs Oby Oko-Enyim; she is an active woman. The coordinator too, Mrs Amuche Otunta, is also a good leader. These two leaders did not wait for the women to finish their protest before they called them and addressed them. They quickly promised them that they would do all they could to curtail the activities of Fulani herdsmen in the area.”

The Coordinator of the Afikpo North Development Centre, Mrs Amuche Otunta, stated, “The women came protesting and at the council secretariat and when I told them what Governor David Umahi has done and is still doing to resolve this issue, they listened to me and ended the protest. At first, when people tried to pursue the women back, they did not agree. But when I talked to them, they listened to me, because they knew that whatever I promised them in the past, I have always tried to fulfil.”

Otunta added, “The truth of the matter is that the herdsmen’s cattle are really destroying our farmlands here and this may likely cause hunger among the people. But I’m happy with what the governor is doing to address this issue, not just in Afikpo, but across the state. But the truth again is that our people are predominantly farmers and it is important that this situation is resolved so that they will not always be on the losing side.

“So, this is an indication that we are not just going to sit down and fold our arms and watch the situation get out of hand. I am a farmer too and some of us in government, who have farming as our second address, are being affected. When I was talking to the women that day, I told them that I was also being affected, because I have a cassava farm. My mother is also being affected. So, it is not really a happy situation for us.

“I personally lost a lot of money last year to the destruction of my farm. One of the women wept and said she lost about N2m, which she claimed to have borrowed from a bank. If we key into what the government is doing and continue to implement those steps taken by the state and local governments, we will overcome this situation soon.

When contacted, Oko-Enyim said the development was not peculiar to the local government area alone, adding that the same thing was being experienced across the country.

She also said the Ebonyi State Government had not left any stone unturned to ensure that the situation was nipped in the bud.

The council boss said, “What is happening in my LGA is not peculiar to it alone. This situation goes beyond Ebonyi State and other states are suffering the same. We are not saying that what these herders are doing is right.

“But we are also law-abiding because there is a resolution already in place in the state and that is whenever herdsmen and their cattle destroy natives’ farmlands or produce, they should pay for them or be held responsible. And the leaders of the herdsmen in the state were signatories to that communique.

“But here, my people do not want payment of compensation for crops or farmlands damaged; here we are saying it should not happen at all. The herdsmen should abide by the laws of the state and since we are one Nigeria, leave peacefully with the people. This is why we held a meeting last week with the herders, traditional rulers, women and farmers and others on this matter to let them know that there is a need for them to control their cows to ensure that our farmlands and produce are not destroyed. Even tomorrow, we are still going to meet with them again on this matter.”