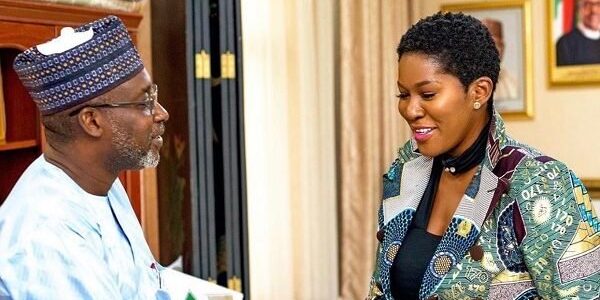 The 37- year- old award winning actress announced this via her Instagram page.

She posted: “Good Morning Amazonians and Warlords, I have been appointed as National OPS-WASH Ambassador by the Honourable Minister of Water Resources.-Details;In his address, Engr. Adamu charged Mrs Linus to inspire behavioral change among Nigerians for people to take responsibility for their environment in her role as OPS-WASH Ambassador.”

“While applauding her efforts with the “Hygiene First campaign, he also implored her and her team to map out different activities that would encourage environmental sustainability across the nation.Also present is Dr Nicholas Igwe who is the National coordinated for OPS-WASH.

“The premise of OPS-WASH is based on multi-stakeholder collaboration. He thus expressed excitement for the involvement of the entertainment industry in the WASH sector in creating behavioral change.As the OPS- WASH Ambassador, Mrs Linus promised that she will use her role to challenge Nigerians to make good hygiene a culture, as well as inspire citizen participation and responsibility. This appointment comes as a public sector recognition of the Hygiene First campaign which she launched in May 2020.