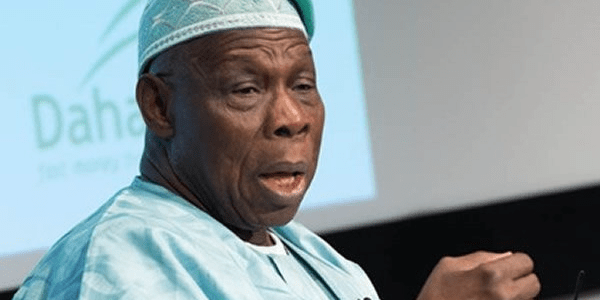 A Civil Society Organisation (CSO), Citizens Action for Good Governance (CAGG) on Thursday in Abuja condemned a statement by former President Olusegun Obasanjo, on the state of the nation that Nigeria had become a failed state.

The statement had discredited the  Muhammadu Buhari led government as leading the nation to extinction.

It would be recalled that Obasanjo on Sept. 13 claimed that Nigeria under Buhari had become a failed state, while Soyinka supported his claim that the country was near extinction.

Addressing newsmen on the issue, CAGG National Coordinator Mr Nazir Galadanchi, said Obasanjo’s outburst stemmed from his inability to tele-guide President Muhammadu Buhari to do his bidding and accede to his self-serving request.

“Obasanjo has been unrelenting, even compulsive and pathological in his attacks, sometimes throwing decency and civility to the dogs and portraying himself as one driven by extreme and unchecked malice and bitterness.

“His most recent utterances and wild claims that Nigeria under Buhari is a failing state is unfortunate, unreasonable, patently false and made against rhyme and reason.

“The irony of it all is that the person making the claim is Olusegun Obasanjo, whose alleged misdeeds and atrocities while in power are legion,” Galadanchi said.

He alleged that Obasanjo among other things arrogantly and illegally withheld payment of statutory allocations to Lagos State government just because of political differences with then Gov. Bola Tinubu

Galadanchi also alleged that Obasanjo made spirited attempts to get the 1999 constitution amended to perpetuate himself in power; in the process, he resorted to the “settlement” tactics, and turning against real perceived opponents of his ignoble bid.

“He unleashed EFCC on his opponents and turned the anti-graft agency into his personal attack dog and allegedly coerced state Houses of Assembly in Plateau, Bayelsa and Oyo to illegally impeach their governors, sometimes at the wee hours, without quorum.

“Under him, fuel pump price was increased six times, and about all workers unions went on endless strike actions; in particular, the federal universities were closed for the longest period in the country’s history.

“Obasanjo privatised our common patrimony and till date, nothing is to show for billions of naira raked out of them neither are they functional, rather caused pain in the lives of Nigerians who were laid off, and many have died prematurely,” he added.

Galadanchi noted that Obasanjo allegedly injured the unity of the country and also ran down the economy which had now created unprecedented poverty.

According to him, Obasanjo has no moral justification to speak on the present situation of the country’s economy having contributed to its downfall.

He urged the former president to always show good example and refrain from talking or acting in unbecoming ways.

The CAGG coordinator also advised Soyinka not to make unfounded statements that are unpopular as the country would never go into extinction under the present government.

Galadanchi pointed out that the enormous resources committed by the present government to fight terrorists were glaring enough for all to see and that it was yielding positive results.

“Nigeria is not in state of disarray nor extinction because the Buhari-led administration has done what other administrations could not do for the past 21 years of democracy in Nigeria.

“The Buhari-led administration has fought corruption to a level that the international community is applauding the efforts of the government; those that made themselves untouchable while they were neck-deep in corruption have been made to face the wrath of the law,”he said.