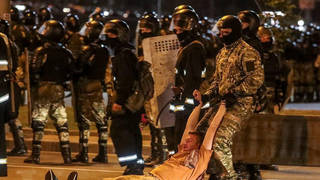 Protesters are rallying in Belarus despite ongoing clashes with riot police who have deployed teargas and flash grenades, as they express discontent with incumbent President Alexander Lukashenko’s projected re-election.

Lukashenko is forecast to receive a whopping 81.35 percent of the official vote, while the main opposition candidate, Svetlana Tikhanovskaya, is expected to get 8 percent. She refused to acknowledge her defeat saying the results from three polling stations where “there were no falsifications” showed that she was actually winning.

This sentiment was clearly shared by many in the capital as angry protesters gathered in the center of Minsk and in other cities throughout the country.

The rallies started with people gathering outside polling stations, chanting “Shame on you” to members of electoral commissions as they were escorted out by the police after finishing the ballot count. Other videos showed crowds shouting “Go away” and “You are not Belarus,”addressing President Lukashenko. Before long, protesters were clashing with riot police.

By midnight, hundreds had gathered in one of the main squares of Minsk. The riot police used flashbang grenades, tear gas, water cannons and shot rubber bullets against the demonstrators who pelted bottles and other projectiles in return.

A video from the capital appears to show a police truck ramming into the crowd.

Several arrests were made. Police said that one of its officers was hurt in the scuffles, with videos from the scene showing bloodied demonstrators. Pictures on social media show medics helping people with bloody heads and apparent injuries to other parts of the bodies. Local reporters in Minsk said ambulances were taking both protesters and police officers away.

Protesters can be heard shouting to police officers to join them in several videos appearing on social media.

Protests also took place in other cities across the country, including Gomel, Mogilev, and Vitebsk.  In some places there was much smaller police presence and protesters even managed to turn them running.

0 comments on “Teargas, clashes with riot police in Belarus as protesters rally over Lukashenko’s projected victory”