‘The Moscow consensus’: as West’s centuries-long hegemony comes to an end, Russia & other emerging markets have ideas of their own 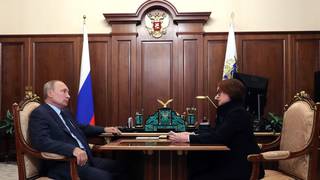 a story with this clean and simple app that delivers the latest headlines to you.RTLIVE

‘The Moscow consensus’: as West’s centuries-long hegemony comes to an end, Russia & other emerging markets have ideas of their own

Vladimir Putin and Chairman of the Central Bank of the Russian Federation Elvira Nabiullina during a meeting. September 24, 2019. ©  Sputnik / Mikhail Klimentyev

By Ben Aris, editor-in-chief of business news publication bne IntelliNews.Russians and Americans often seem like they are talking over each other. Both sides have their own view of the world, and increasingly, are able to agree on very little.

The Western view is that Russia is our enemy. It is trying to destabilize the international order and undermine democracy so that its president, Vladimir Putin, can re-establish the USSR for the benefit of his corrupt cronies. Against him stand those of the civilized world, who believe in the values of democratic individual freedoms, justice and the rule of law.

Is that a fairly accurate picture of how many governments and commenters see Russia today? I’m sure a lot of people would add plenty to the list, but let’s take this as a starting point.

How about Russians themselves? They, of course, see things a little differently. To them, the US is a global hegemon that is determined to dominate the international order with its unipolar view of the world. It is the most belligerent country in the world and adheres to international law only when it suits it. It invests in “human rights” and “pro-democracy”organizations that are actually fifth columns to impose its worldview on other countries. It’s not Russia that is empire-building, but the US, through the relentless expansion of NATO to surround Russia, and the Americans would attempt a ‘regime change’ in Russia if they could.

You can take issue with all of this and most of Russia’s claims – such as on NATO expansion – are simply dismissed in the West as excuses or whataboutism.

Where is the truth? Probably somewhere in the middle, but just how far to the right or left will remain the subject of a hot debate that will go on for as long as Putin remains in office.

The West’s ideological foundation can be summarized as the Washington Consensus, which is the dominant global ideology today. British economist John Williamson coined the term in 1989, listing 10 principles that emerging markets should follow if they want to become successful countries.

It refers to a set of free-market economic policies supported by prominent financial institutions such as the International Monetary Fund, the World Bank and the US Treasury, that has become the benchmark for orthodox values against which a country like Russia is judged by the West.

These are the ten specific principles originally set out by Williamson 31 years ago:

1. Low government borrowing. The idea was to discourage developing economies from having high fiscal deficits relative to their GDP.

6. Adoption of free-trade policies. This would result in the liberalization of imports, removing trade barriers such as tariffs and quotas.

8. The privatization of state enterprises. Typically, in developing countries, these industries include the railways, oil, and gas.

9. The eradication of regulations and policies that restrict competition or add unnecessary barriers to entry.

All these principles are realized through democratic processes, an independent judiciary and the strong rule of law. Underlying these principles is the assumption that the US is the global arbitrageur of the Washington Consensus and its interpretation what these goals mean is decisive.

Many emerging markets have rejected many of the points on Williamson’s list, in effect sacrificing some of their economic potential for security and political gains.

Then there’s the Moscow Consensus – which is largely a rational response to the Washington Consensus.

International businesses working in Russia have embraced a pragmatic view of the Moscow Consensus: Yes, Russia is corrupt, but most Russians accept that as a fact of life, as long as it stays “within reason;” yes, Russia is not very democratic, but people’s votes do matter, just not as much as they are supposed to in a ‘liberal democracy.’ Yes, there are big problems with the rule of law, property rights and corporate governance, but Russia has made enormous progress in the last three decades with all of these challenges. The list could go on but the point is not the current level of any of these problems, but the direction the country is travelling in. And that is forward.

The Moscow Consensus business people are putting their money where their mouth is. Bond investors are overweight on Russian Ministry of Finance, ruble-denominated OFZ treasury bills, which are amongst the most popular bonds in the world. Equity investors have been flooding back into the Russian stock market, which was the best performing in the world in 2019. The RTS index broke its five-year highs in the first quarter of this year, until the emerging markets (EM) sell-off at the end of February marked the start of the current crisis.

In addition, the net inflow of foreign direct investment into Russia jumped to $32bn, a huge change from the previous year’s exceptionally weak numbers, according to Bank of Finland Institute for Economies in Transition (BOFIT). Last year also saw new equity investment, instead of just reinvested profits. Ever since IKEA opened its first store in Russia in 2008, large multinational firms that are already in Russia continue to reinvest every kopeck they make into growth, as business is so profitable.

“Russia is a gold mine,” Vincent Gentil, the CEO of a leading French DIY chain Leroy Merlin, told bne in 2016, in the midst of a recession at the time.

• Democracy: Western democracy is built on “one citizen, one vote” but this ideal is under attack from voter suppression, gerrymandering and the rising power of big corporations. Politics has become ossified into incumbent parties that represent interest groups rather than the general population.

The Moscow Consensus version is a “managed” or “sovereign democracy”that was initially the brainchild of Putin’s adviser Vladislav Surkov, who coined the term in a speech in 2006. It concedes the need for popular votes, but gives the state a special role as the guarantor of stability and prosperity. However, critics point out that this system, too, has been captured by special interest groups, like the oligarchs, and is particularly prone to corruption.

• NATO expansion: The power of the Washington Consensus is that it’s backed by military might and the US security umbrella that has been in place since the end of WWII.

Putin angrily claimed that the West promised Mikhail Gorbachev that NATO would not expand eastwards during his now famous Munich Security Conference speech in 2007, a claim NATO members flatly denied.

However, in 2013 a team at George Washington University published declassified documents showing that a dozen top Western diplomats did, in fact, promise no expansion, starting with West German Foreign Minister Hans-Dietrich Genscher and including Chancellor Kohl, US Secretary of State James Baker and British Foreign Minister Douglas Hurd among others. “All the Western foreign ministers were on board with Genscher, Kohl, and James Baker,”the George Washington University team said in their paper.

But nothing was ever signed and, in the world of diplomacy, there is a big difference between a verbal promise and a treaty. Putin intends to hold the West to the promise even if it was not written down.

Corruption: While the Washington Consensus does not name corruption specifically, eradicating graft is implicit in all its points.

In the West, corruption is considered unacceptable and a large body of law and law enforcement is dedicated to preventing it from happening. However, corruption has been institutionalized in the West in the form of the billions of dollars poured into lobbying and unlimited campaign donations.

The success of 2003 EU accession countries is they had ready-made EU institutions imposed on them and the result has been an extraordinary boom in Central Europe. But even here there has been backsliding, as countries like Poland and Hungary attempt to dismantle their institutions as part of an illiberal wave sweeping the region.

In the East, as bne IntelliNews has written elsewhere, corruption is the system. Without functioning institutions, the easiest way to bind minions to a leader is to grant them fiefdoms from which they can earn a rent. However, Russia’s economic stagnation has forced a limited crackdown on corruption as a way of saving money: the Russian tax service has been through a revolution, which saw revenues rise by 20 percent in the last few years, while the tax base only increased by two percent.

The Moscow Consensus sees corruption as a fact of life; Russians expect their leaders to be corrupt. The issue is simply the level of corruption. There is a complex set of unwritten rules dealing with corruption and citizens are more tolerant of corruption than they are in most of the West.

• Low government borrowing: The advice to keep debt low has bizarrely been turned on its head. Russia now has zero net public or external debt, having built up almost $580bn in reserves. Putin embraced the idea of low debt almost as soon as he took over in 2000. The IMF borrowing was quickly paid off and then the London and Paris clubs of debt were paid down. Since then the Russian government has run deficit-free budgets for almost two decades and maintained public debt in the low teens. This is just what the Washington Consensus calls for, yet Russia is now criticized for having too little debt.

In the West, governments are ignoring their own advice and have built up historically record amounts of debt. According to the Institute of International Finance (IIF), developed markets now have an average of 266 percent of GDP of debt, whereas emerging markets have 166 percent. According to the EU’s Maastricht treaty, debt was supposed to be capped at 60 percent of member states’ GDPs.

• Free trade & protectionism: Free trade is a core value in the Washington Consensus, but some economists argue that throwing open markets at the early stage of transformation in emerging markets is actually a bad idea, as weak emerging-market firms have no chance of competing with their developed market peers.

Russia actually embraced the idea of free trade and campaigned for over a decade to be allowed into the World Trade Organization (WTO), only to be blocked by the US. It was finally admitted in August 2012. But, after the sanctions regime was imposed in 2014, Russia responded with its own sanctions and has in effect closed its market to the West for most agricultural goods.

Free trade under both the Washington and Moscow Consensuses has been increasingly distorted by commercial goals. The US, too, has been using sanctions to try and block gas exports to the EU via the Nord Stream 2 pipeline, with the goal of increasing its own sales of Liqueified Natural Gas.

• Privatization: The Washington Consensus takes as a priori that privately owned business are more efficient and profitable than state-owned companies. While the Moscow Consensus does not deny the efficiency argument, the state is not prepared to give up the political leverage that comes with owning the largest strategic businesses. A key aspect of the Moscow Consensus is that publicly owned companies are part of package deals, where commercial deals are tied up with energy and arms deals.

Like with free trade, Moscow initially bought into the idea of privately owned enterprise, then Russian president Dmitry Medvedev attempted to restart privatizations with a comprehensive programme in 2008. That year marked the high-water mark of Russia’s liberalization and the closest it ever came to adopting the values of the Washington Consensus. But the crisis of the same year reversed the trend.

0 comments on “‘The Moscow consensus’: as West’s centuries-long hegemony comes to an end, Russia & other emerging markets have ideas of their own”