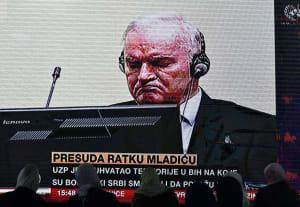 A United Nations court in The Hague on Tuesday upheld a 2017 verdict sentencing Ratko Mladic, the former commander of the Bosnian Serb army, to life in prison for his role in the 1995 genocide, during which Mladic’s soldiers killed more than 8,000 Bosniak Muslims in and around the town of Srebrenica amid the Bosnian War.

Analysts expected Mladic’s appeal to fail, and many in the international community, including President Biden and Secretary of State Antony Blinken, applauded the ruling, but some human rights activists were not entirely satisfied, Balkan Insight reports.

Stasa Zajovic from the Serbian peace group Women in Black, for example, had hoped Mladic would also be convicted of genocide in several other Bosnian municipalities in 1992 in addition to Srebrenica. And while Sonja Biserko, the head of the Helsinki Committee for Human Rights in Serbia, said the “verdict is very important,” she also suggested the ruling failed to adequately address the Serbian government’s role in the conflict, freeing the current administration in Belgrade to “twist things to say that it was not in the war, that it was the [Bosnian] Serbs’ liberation war.” Relatedly, Ivana Zanic, the director of the Humanitarian Law Centre in Serbia, said she does not believe the ruling will prompt Serbia to change its viewpoint that the killings did not constitute genocide. Read more coverage of the ruling at Balkan Insight.