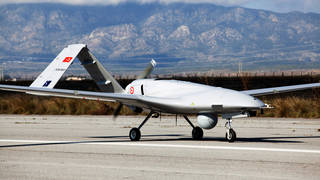 Fearsome unmanned aircraft capable of carrying laser-guided rockets, mortar rounds, and anti-tank missiles could soon be patrolling close to Russia’s borders under the terms of a deal between Ukraine and Turkey, Kiev has revealed.

In an interview with the Ankara-based Anadolu news agency, published on Monday, Ukrainian Foreign Minister Dmitry Kuleba said the technology would help it in the event of conflict with Moscow, and it had been bought “for protection.”

“Drones are needed to contain Russia,” he claimed, “so that it thinks twice before planning any escalation or large-scale attack … If Russia attacks and gets involved in a large-scale military conflict with us, then we will use drones in any part of Ukrainian territory to protect ourselves.”

Kiev signed a deal in 2019 to buy the new class of unmanned aerial vehicle, the TB2, from Turkey, and has received at least six to date. However, Turkish President Recep Tayyip Erdogan, told Ukrainian officials that the Kremlin had threatened economic and political measures unless Ankara pulled back from its drone sales.

The TB2 is a medium-altitude aircraft that can remain airborne for up to 27 hours, controlled by an operator on the ground, far from the front line. Its armaments include long-range anti-tank rockets, precision-guided munitions, missiles, and long-range ammunition.

In April, the death of five-year-old Vladik Shikhov in the Donbass region of Ukraine made headlines across the world. The boy’s grieving family said he had been killed by a rocket from a drone controlled by Kiev’s forces. Officials in the Ukrainian capital, however, claimed he had stumbled on an old shell in his war-torn hometown.

Fighting between Ukrainian troops and those loyal to the two breakaway self-declared Donetsk and Lugansk People’s Republics has escalated in recent months.