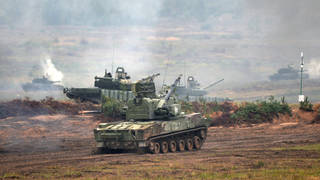 and simple app that delivers the latest headlines to you.RTLIVE

Follow RT onThe Belarusian defense minister has ordered troops in the western Grodno region to be reinforced with tactical missile units, drones, and air defense systems, after President Alexander Lukashenko told him to “keep an eye” on NATO.

Earlier, Lukashenko said that increased NATO activities on the nation’s western borders had sparked some concerns in Minsk, adding that movements near the Grodno region, in particular, “got you thinking.” During a Security Council meeting on Wednesday, the president also ordered the Defense Ministry to keep a close eye on the alliance.

The Belarusian military apparently took his advice to heart, as Defense Minister Major General Viktor Khrenin immediately ordered the forces under the western operational command to be beefed up with a tactical missile and multiple rocket launcher battalions, and drone and air defense systems.

The troops in the Grodno region are already taking part in military exercises, involving tank and mechanized infantry battalions, as well as artillery forces and airborne troops. Now Khrenin has asked the military to draft proposals for additional defensive drills.

Lukashenko, meanwhile, is claiming his nation is as strong as ever and ready to repel any potential invader, despite the huge anti-government protests that broke out following the controversial presidential elections last Sunday week.

“Those, who believe that the government here … is becoming unstable, are mistaken,” he said.

We will not budge. Those abroad sharpening their swords will be met with firm resistance.

Belarus has been gripped by protests for more than a week since the presidential elections that saw Lukashenko declared the winner. The opposition, the European Union and some Russian politicians have contested the results, arguing that the vote was rigged.

These developments drew the attention of Western nations, which have accused Lukashenko’s government of “falsifying” the election outcome and suppressing the protests. In turn, the Belarusian president warned the West against interfering in his country’s internal affairs.

0 comments on “‘We won’t budge’: Belarus sends MISSILES & DRONES to western border – says it is responding to ‘NATO activity’”