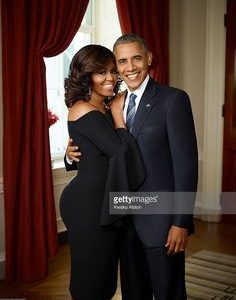 It’s been a White House tradition for decades: a first-term president hosts his immediate predecessor in the East Room for a ceremony to unveil the portrait of the former president that will hang in the halls of the White House for posterity.

Republican presidents have done it for Democratic presidents, and vice versa — even when one of them ascended to the White House by defeating or sharply criticizing the other.

“We may have our differences politically,” President Barack Obama said when he hosted former President George W. Bush for his portrait unveiling in 2012, “but the presidency transcends those differences.”

Yet this modern ritual won’t be taking place between Obama and President Donald Trump, according to people familiar with the matter. And if Trump wins a second term in November, it could be 2025 before Obama returns to the White House to see his portrait displayed among every U.S. president from George Washington to Bush.

Trump is unconcerned about shunning yet another presidential custom, and he has attacked Obama to an extent no other president has done to a predecessor. Most recently he’s made unfounded accusations that Obama committed an unspecified crime.

Obama, for his part, has no interest in participating in the post-presidency rite of passage so long as Trump is in office, the people familiar with the matter said.

Video Not Available Unfortunately, this video is not available in your region. RS-100-202

It’s too soon to know whether the absence of the uniquely harmonious occasion, when presidents set aside political differences, is just a reflection of a singular dynamic between two presidents whose differences have increasingly been airing in full view or whether it is symbolic of a broader, bitter political era.

But it’s nonetheless a telling snapshot of American politics in 2020.

“You’ve got a president who’s talking about putting the previous one in legal jeopardy, to put it nicely. We have not seen a situation like that in history,” presidential historian Michael Beschloss said. “It takes antipathy of a new president for a predecessor to a new level.”

It’s not often that two presidents are together in the White House; only five living men know what it’s like to occupy it as chief executive. Official portrait unveilings are even rarer because the current first lady and her immediate predecessor also attend. A portrait of the former first lady is unveiled, as well.

“It is a somewhat daunting experience to have your portrait hung in the White House,” former first lady Hillary Clinton said at the unveiling of her and President Bill Clinton’s portraits in 2004. “It is something that really does, more than any other act, sort of put your place in history in this building for all the ages and all the people who come through here to see and reflect upon.”

She added that when she was first lady, she took “great solace from many of the portraits of the former first ladies, because it is a very difficult role.”

Official White House portraits are separate from the presidential portraits that hang in the National Portrait Gallery in Washington, where the Obamas’ were unveiled in February 2018.

The process for the White House portraits begins near the end of a president’s term or soon after, and it takes a few years to complete.

After the president and the first lady select an artist, the privately funded White House Historical Association negotiates a contract that includes a confidentiality agreement so the artist’s identity and details of the portrait are kept secret. Stewart McLaurin, president of the White House Historical Association, said in February 2017 that the organization was in discussions with the Obamas about their portraits.

The Obamas subsequently selected an artist, and a contract was finalized in early 2017, according to people familiar with the matter. But the process stalled there, they said.

The unveiling brings together the former president’s staff, family and close friends to mingle with current White House officials. Former first lady Laura Bush arranged a lunch for the Clintons and guests after their portrait unveiling.

“It’s a statement of generosity on [the part of] the current president and first lady,” former White House curator Betty Monkman said in an interview with the White House Historical Association in 2017. “And it’s a very warm, lovely moment.”

The first formal East Room unveiling with a president and his immediate predecessor appears to have been in 1980, when Jimmy Carter welcomed Gerald Ford back to the White House. Carter had defeated Ford just four years earlier. Three months after he hosted Ford, Carter lost his bid for re-election to Ronald Reagan.

Download the NBC News app for breaking news and politics

Before that, first lady Lady Bird Johnson hosted unveiling ceremonies in the East Room for portraits of two of her predecessors — Eleanor Roosevelt and Bess Truman — and invited their family and friends.

The unveiling of President John F. Kennedy’s and Jacqueline Kennedy’s portraits in 1971 was the only time the former first lady returned to the White House after she left following her husband’s assassination. President Richard Nixon and first lady Pat Nixon invited her for an unveiling ceremony, but she agreed to go only for a private viewing, and the media weren’t informed that she’d been to the White House until after she and her children left.

Carter doesn’t appear to have attended a ceremony for his White House portrait while Reagan was in office.

Gerald Rafshoon, Carter’s White House communications director, told NBC News that he didn’t know the details of why a ceremony wouldn’t have happened, but he said that the former president was focused on setting up his library after leaving office and that a ceremony in his honor wouldn’t have been his style.

“It would probably be out of his character to want a big ceremony in Washington that soon,” Rafshoon said. “I would imagine he opted not to have it.” Carter’s portrait did make its way to the White House.

An East Room ceremony did take place in 1989 for Reagan’s and first lady Nancy Reagan’s portraits. “They’re sure different than a lot of those cartoons we had to put up with,” Reagan joked.

“There are really no words to convey what it means to Nancy and me to be here,” Reagan said at the event, hosted by his vice president and successor, George H.W. Bush.

When Clinton attended his own portrait unveiling in the East Room, his host — President George W. Bush — was five months from facing re-election. Bush, who had won election after promising “to restore honor and dignity” to the White House, had warm words for Clinton. “Bill Clinton could always see a better day ahead, and Americans knew he was working hard to bring that day closer,” Bush said.

And when Bush returned to the White House for his portrait unveiling in May 2012, Obama was in the middle of a heated re-election campaign.

Obama had won his first term in large part by campaigning against Bush’s policies, particularly the Iraq war. Bush turned his successors’ political barbs into a joke, telling Obama: “When you are wandering these halls as you wrestle with tough decisions, you will now be able to gaze at this portrait and ask, what would George do?”