Why forces for, against Kyari clash over new CoS 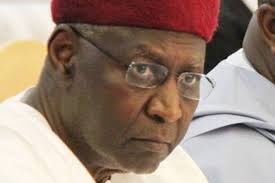 Barely 24 hours after his remains were interred in Gudu cemetery, serious political storm around Nigeria’s presidency is raging between those in the camp of the late Chief of Staff, Mallam Abba Kyari, and those who had been opposed to his style in the past five years. Although sources disclosed that President Muhammadu Buhari is not readily disposed to a quick replacement of the late CoS, those divergent political interests that the late Kyari moderated over are said to be behind the ongoing power-play in the presidency.

While those who are perceived to have lost the bigger end of the stake with the demise of Kyari are making frantic efforts to sustain their adventurous advantages, others, who have been angry and sidelined by the former CoS, want the table to turn in their favour, especially going forward to 2023.

Investigation by The Guardian showed that the anticipated reshuffle of the federal cabinet, fight for the soul of the governing All Progressives Congress (APC) party’s structure and Buhari’s declining interest in political matters, constitute the major reasons fueling the stiff battle for ascendancy in the search for a new Chief of Staff.

It was gathered from insiders that President Buhari decided on reposing a greater confidence in the delivery of his second term mandate to his former CoS based on his not so robust physical and mental health and the need to shield himself from the intrigues of entrenched political forces.

Eyes on APC
What came-off as the last political action by the late Abba Kyari was his intervention in APC leadership, particularly the move to remove the national chairman, Comrade Adams Oshiomhole, following the ruling of a Federal High Court that upheld his suspension from the party.

Although Oshiomhole received a brief lifeline from that august meeting in the presidency with the late Chief of Staff and APC governors, the governors were said to have left the meeting dejected that Kyari had to intervene the way he did by obviating the judicial machinery that was clearly activated to displace the national chairman.

But it was learnt that the governors were pacified by the fact that after all, what the Court of Appeal did after its volte face on handling the substantive matter of Oshiomhole’s appeal was merely to deliver on an ex parte motion by his counsel. Now, against this background, could it be that the death of Kyari and vacancy of his office has signaled a possible return to the trenches? More than that, does that setback explain APC governors’ renewed interest to have a say or an input in the search for Kyari’s successor in office as CoS?

Edo State chairman of APC, Anselm Ojezua, who is also a party to the case in the FCT High Court, which barred Oshiomhole from parading himself as national chairman, said it is erroneous to create the impression that the late Kyari was a central figure in the crisis.

Ojezua stated: “I do not think his death is a setback. He was not a central figure in the crisis in the party; there is a general setback in the activities. But I think the issue of reconciliation has to do with the attitudes of all those concerned.”

In a telephone interview with The Guardian, Ojezua noted that the ex parte ruling of the Court of Appeal is a legal reality of a limited relief, adding that in the event that “hostilities persist, then of course, that is one of the possibilities.”

It could be deduced that the above legal ambush by the APC governors is what they seem to be leveraging on as they engage in the search for “an upright and fair-minded candidate” to step into the shoes of Kyari.

At the thick of public concerns about the delay by President Buhari in appointing his ministers, the presidency reminded the governors that the prerogative of appointing the aides belongs to the president, arguing that the president does not make inputs in their appointment of commissioners. Ojezua, while rejecting the notion that state governors are foot soldiers of the party, contended that governors are strategic leaders of the party, stressing that each state governor “controls a section of the country.

“The central government rests on the shoulders of the governors; they are a critical mass in every political milieu, including political parties. So, they have not just the power, but they have responsibilities towards the wellbeing of the party. And any role they play in that regard, in my opinion, is something that is more desirable than a privilege.”

Ojezua, who is also lawyer, noted that since it is their duty to ensure the wellbeing of the government when it comes to appointment, “they (governors) have to make sure that whoever gets appointed is a square peg in a square hole.”

One of the signposts in the reconciliation timeline set by Kyari was the issue of aligning the second term ambition of some state governors, particularly Godwin Obaseki and Rotimi Akeredolu, who are due to seek re-election in Edo and Ondo States later this year.

At APC’s National Executive Committee (NEC) last year, President Buhari made it clear that the tradition of the party is that every governor that performs creditability should be allowed to do a second term in office. However, the point of disagreement between the national chairman, Oshiomhole, and the progressive governors, has always revolved around the interpretation of President Buhari’s declaration that governors that do well should get a second term.

Comrade Oshiomhole’s argument that the party’s ticket could only be available to any governor after subjecting himself to a primary election, prompted the APC governors, in a bid to show solidarity with their colleagues in Edo and Ondo, to fly the kite of ‘right of first refusal’ to avert a repeat of the arbitrary axe that fell on former Lagos State governor, Akinwunmi Ambode.

Does Kyari’s death signal a return to trenches by the forces loyal to Obaseki and Oshiomhole? Ojezua disagrees. He said the former CoS should not be seen as a central figure in the crisis, since according to him, his role was merely that of arbitration. But Ojezua seems to lost sight of the fact that it was in a bid to create a buffer for himself that President Buhari empowered Kyari as political superman, particularly to enhance his reluctance to involve himself in partisan affairs.

According to Ojezua, “Kyari was from Borno State and I don’t think anybody has come up to say there is a problem in Borno APC. There are so many problems in so many places created by party leaders in their numerous responsibilities and nothing to do with the former Chief of Staff. The people who created the problems are very much alive and they are in a position to right whatever they have done wrong.”

Yet, even as Ojezua insists that Governors Obaseki and Akeredolu “have acquitted themselves meritoriously and deserve to be reelected,” Comrade Oshiomhole insists that the party’s constitution has no provision for automatic ticket. While speaking to party stalwarts in Benin City, Oshiomhole noted that whoever believes that he is popular should not be afraid to face his party men and women to get their approval for the APC ticket.

The push by contrary groups in the Kyari divide is also being felt in some states, especially given the fact that the former Chief of Staff was accused of arbitrarily choosing cabinet nominees to the exclusion of APC stakeholders. For instance, the members of the Kwankwasiyya group in Kano State believe that Kyari was instrumental to their loss of the state, after the former CoS shunned Senator Rabiu Kwankwaso to work for Governor Abdullahi Umar Ganduje.

The animosity between the Kwankwasiyya group and the late Kyari must have prompted the Facebook gloating by the recently sacked Commissioner for Works and Infrastructure in Kano State, Alhaji Muazu Magaji, who had thrown caution to the wind by describing Kyari’s death as the pathway to peace and freedom for Nigerians, adding that with the demise of the former CoS, “Nigeria would now breathe some air of freedom, as they would now be free of the vice grip of the ex–CoS.”

Although Governor Ganduje did not waste time in sacking Muazu, who crossed over to APC from Peoples Democratic Party (PDP) shortly before the election, he (Muazu) remains adamant in his assertion that “there is a world of difference between a good person and a good leader. Leadership is an aggregated quality of mass empathy and personal favours. Institutional democracy is bigger than the state. Our interest is to get equity and capacity in the highest position of power. It is not personal.”

Just like Senator Lawal Shuaibu, whose letter to Oshiomhole to resign from office sparked off the latent troubles in the governing party, Muazu’s decision to do away with political correctness to state his mind about the former CoS and his style gives impression of the underlying challenges for APC and the government it formed at the national level.

But even in death, the friends of Abba Kyari, especially those that benefitted from his ‘political large-heartedness,’ are not giving up on him. For instance, in an incisive tribute, the Minister of Foreign Affairs, Mr. Geoffrey Onyeama, described the former CoS as the best man (for the job). Onyeama, whose nomination as minister sparked off protests in Enugu State, stated: “Abba was very simple and humble. He was also very friendly with everyone. He had very little interest in material things. We had a common interest in politics and I believe it was our socialist political values that cemented our friendship because we were always discussing politics and how to salvage Nigeria right up to his passing…

“Abba believed completely in the Nigerian project and believed completely in President Muhammadu Buhari. During the last five years he gave every second of his life for the success of both. His health suffered as a result but it was a sacrifice and investment he was happy to make. Nigerians will look back in years to come and see that he was truly the Best Man.”

In the coming days, those who benefitted from Kyari’s magnanimity would continue to push to assert their continued relevance, while those who disdain the deceased’s perceived parochialism and nepotism will sustain their vehemence against such tendencies.

0 comments on “Why forces for, against Kyari clash over new CoS”