‘Differences, not disputes’: India & China agree on de-escalation plan, say border standoff ‘not in the interest of either side’ 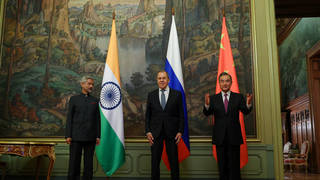 New Delhi and Beijing have agreed to ratchet down tensions that have been building along the disputed Chinese-Indian border, leading to skirmishes, as they announced a five-point de-escalation plan at a meeting in Moscow.

Tensions have been flying high along the Line of Actual Control (LAC) in Eatern Ladakh at the Chinese-Indian Himalayan border since May, and have repeatedly led to clashes between Indian and Chinese troops stationed in the sparsely populated mountainous area.

The plan – agreed by India’s External Affairs Minister S Jaishankar and his Chinese counterpart Wang Yi on the sidelines of a Shanghai Cooperation Organisation (SCO) meeting in Moscow on Thursday – envisages that troops on both sides of the border will “quickly disengage, maintain proper distance and ease tensions.”

Announced in a joint statement, the agreement also states that both New Delhi and Beijing pledged to abide by “all the existing agreements…maintain peace and tranquility,” as well as not allowing “any action that could escalate matters” in the area.

The reduction in hostilities between the two countries – which have sparked fears of a full-fledged armed conflict, with frequent and sometimes deadly border showdowns – will be based on “the series of consensus” between Indian PM Narendra Modi and Chinese President Xi Jinping, “including not allowing differences to become disputes,” the statement says.

In a bid to avert border face-offs in the future, the officials agreed to keep in touch through specially-designed communication mechanisms, as well as speed up work on new “confidence building measures” to ensure the long-standing border row won’t spiral into a shooting war.

The apparent thaw in Sino-Indian relations comes after the worst flare-up between the neighbors in four decades. In mid-June, a serious brawl between rival troops in the Galwan Valley left 20 Indian soldiers dead. Since then, several minor alterсations have taken place, deepening the rift between the world’s two most populous nations. The latest such incident came on Monday south of the glacial Pangong Tso Lake, with both countries pointing fingers at each other as the instigator behind the confrontation.

0 comments on “‘Differences, not disputes’: India & China agree on de-escalation plan, say border standoff ‘not in the interest of either side’”