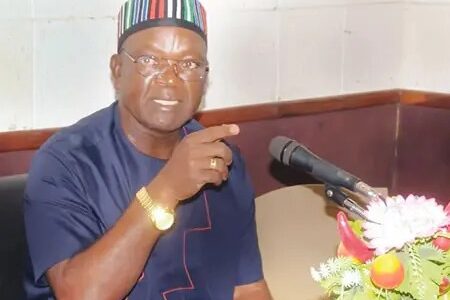 Governor Ortom spoke in Makurdi while delivering a keynote address at the 2021 annual law week celebration with the theme “Open Grazing in Nigeria: Threat to National and Food Security, National Cohesion and Sustainable Development.”

He said Nigeria is ripe for implementation of a policy on ranching as captured in the National Livestock Transformation Plan adopted by the National Economic Council (NEC), which he noted would not only protect farming communities but also stop cattle rustling.

The Governor urged the Federal Government to publicly condemn atrocities perpetrated by armed herdsmen as well as arrest and prosecute the leadership of Miyetti Allah Kautal Hore.

He said Benue vehemently stands against grazing routes and any other policy under the guise of open grazing, stressing the practice is not only archaic but anti-development and retrogressive.

The Governor charged lawyers to reflect soberly on the future of Nigeria with a view to making it better, pointing out the country is on life support and the oxygen is fast running out.