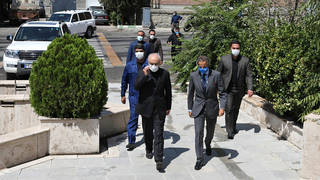 “As part of an agreement with Iran to resolve safeguards implementation issues specified by the IAEA, the agency this week conducted a complementary access at the second location in the country and took environmental samples,” it said in a statement.

Neither of the two sites were identified in the statement, but the agency said the suspected activities are thought to have taken place there back in 2003. Samples taken during the IAEA visits to both sites will be sent to labs and analyzed for traces of nuclear material. Tehran says it has never had a nuclear weapons program.

After the first site inspection, IAEA Director General Rafael Grossi said earlier this month that a visit to a second site was imminent. He also said that analyzing the environmental samples collected at the first site would take “two or three months maybe.”

The site visits had been held up for several months after Tehran refused access, but Iran said it would allow IAEA inspectors in after a visit to Tehran by Grossi in late August. The trip came after the UN agency’s board of governors passed a resolution in June urging Iran to comply with the agency’s requests.

Under the 2015 deal between Tehran and major powers, the IAEA monitors Iran’s nuclear activities. In early September, the watchdog said that the country’s stockpile of enriched uranium now stands at more than 10 times the limit agreed in the nuclear deal.

President Donald Trump unilaterally pulled the US out of the deal in 2018, insisting it needed to be renegotiated, and Washington has more recently pushed to ‘snapback’ sanctions on Tehran, a move rejected by the UN Security Council. The remaining parties to the 2015 deal – Britain, China, France, Germany and Russia – have called on Iran to meet its commitments, while Tehran says it has yet to realize the economic benefits from the agreement.