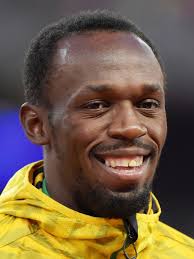 Bolt, 34, and his partner, Kasi Bennett, announced the news in a Father’s Day Instagram post, with a lightning bolt emoji next to each of their three children’s names. The couple have a daughter, Olympia Lightning, aged one.

While Thunder Bolt is a clear play on words, Saint Leo is the middle name of the Jamaican athlete considered the greatest sprinter of all time.

The choice of the children’s names took social media by storm. “Listen, when your name is Bolt and you’re the fastest man alive, the universe is telling you to do all the cool things with the baby names,” wrote one Twitter user.

An 11-time world champion, Bolt retired after the 2017 World Championships in London, where he suffered a hamstring injury in the final race of his career.

The couple posted photographs of themselves with their children, their newborn sons seemingly asleep in wicker cribs while their sister held a ball. A caption by Bennett read: “Happy Father’s Day to my forever love! Usain Bolt. You are the rock of this family and the greatest daddy to our little ones. We love you world without end!”Advertisements

They did not reveal when the twins were born. Olympia Lightning was born in May 2020, with her name announced publicly two months later. Neither Bolt nor Bennett had posted about her pregnancy with the twins.

After the end of his career in athletics, Bolt briefly played professional football. He will shortly be starring in Soccer Aid, alongside reality star Mark Wright, TV presenter Ore Oduba and Love Island’s Kem Cetinay for a charity match at Manchester City’s Etihad Stadium in September.